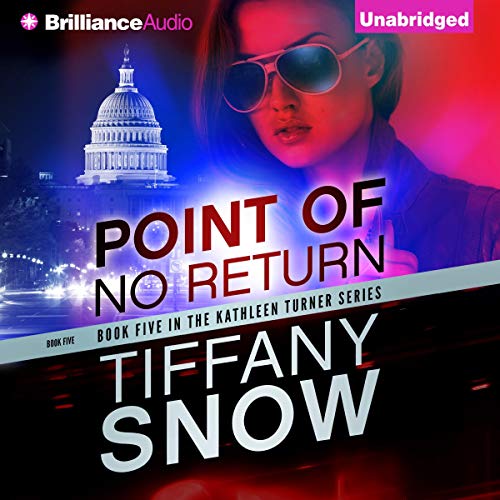 Kathleen Turner wasn’t expecting to fall in love when she came to Indianapolis a year ago, much less with two very different men. And not just any men: Brothers.

Blane Kirk, former SEAL turned attorney, is every woman’s dream man. He’s also a playboy who changes women as often as he changes his tie, and trying to hold on to Blane could only break Kathleen’s heart.

Commitment is a foreign word to Kade Dennon, assassin-for-hire and genius hacker, and nothing about him is safe. A future with Kade would surely end in disaster - for both of them.

Past betrayals come to a head, and the choice Kathleen makes could sign her death warrant. Everything’s at stake as Blane, Kade, and Kathleen reach the Point of No Return.

I've read the Kathleen Turner series several times over the years and love it. As I'm into audio books at the moment I thought I'd try them out too, and I'm so glad I did as Angela Dawe brings the characters to life. Brilliant!

I can honestly say that I'm really pleased to have finally finished this series! I know that that is a strange thing to say, but I really didn't enjoy this series.

The romantic triangle is a little bit unbelievable; credible in some instances, and incredulous in others! In this conclusion, which was seemingly endless and long drawn out, the benefits of the triangle almost bala

The worst of the series. All "romance" if you equate sex with romance, almost no story.

This is a bvague plot executed in snatches between sex scenes. Because the conflict is all external, the sex has no emotional punch. And Kathleen becomes nothing but a brood mare despite her smarts.

Tired of so much romance

I really liked this series at first but the last 2 books were more romance than anything thing, and how many times can the same people be involved with a death happening and the police aren't suspicious.

I've enjoyed this series. I'm happy with the way things ended, especially for 2 reasons 1 - the love triangle was resolved 2 - the author didn't keep us on pins and needles for 20 odd books with no resolution of the love triangle. Tiffany Snow gave us 5 books and didn't make us wait until the end of book 5 to find out who "got the girl". For that I'm very grateful.

What a disappointing ending to a great series.
Kathleen was stupid and cruel and Kade was selfish. The only good guy was Blane and he got the shaft!

Kade is in it up to his eyeballs and he knows it! The only way to keep Kathleen safe is too back to her and guard her himself. It will kill him, but there's no other way.
Blaine's life is shattered. Kade ran off under unreasonable circumstances. Kat moved away without a word, refusing to let him take care of her and baby. He's alone and can't understand how it got so twisted up.
Kathleen had to get away. Kade was gone. Blaine's off to step in and take Kade place was wrong in every level she could think of. It was time go home and start over; with her baby, alone.
But the true puppet master isn't through with yet. A near death and a desperate call puts the 3 back together plus Brenna in a race to find whose calling the shots and the hit man before they all end up dead. And even then.... is it really over? Will it ever be?

This book wraps up this series in a very entertaining way but with some angst. The wonderful characters and the suspense are great. This narration is very good!

Not much more to say. I loved this entire series. I would highly recommend the audiobook as well. Thanks to the author!