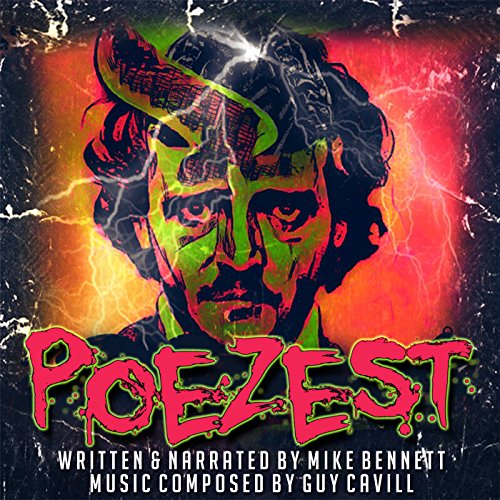 Poezest contains works of legendary author Edgar Allan Poe reworked and reimagined by Mike Bennett, who has intertwined elements of Edgar Allan Poe's character with well-known works such as 'The Black Cat', 'The Raven', 'The Tell-Tale Heart', 'The Premature Burial' and many more.

Written in verse and prose, this body of work captures the spirit of Poe whilst retaining an originality that is as comedic as it is macabre, replete with murder, mystery and Machiavellian intrigue. The music underscore has been provided by Guy Cavill, capturing the mood of the creepy tale that helps to take the listener on a journey that has more twists and turns than Brands Hatch.

About the author: Mike Bennett has written for many performers and comedians, including Frankie Howard, Phil Cool, Anita Harris and Rik Mayall, The Muppets (Henson TV) and Primary Science (BBC 2).

About the composer: Guy Cavill composes classical music, themes and musicals and has had three biographies published.

What listeners say about Poezest

Such dark and mad shenanigans of a disturbing soul.

Just wonderful. Simply Devine in every respect. Dark macabre and slightly disturbing in an amusing way that only could happen to an Victorian gentlemen. Simply purrfect in every way. I listened to it three times while doing the house work and bury a body. Lol.

For any fan's of Edgar Allen Poe this is a must listen to book. Dark Gothic tales laced with humour and bizarre characters that will be familiar to all fan's of Poe.
Soon to be presented as a stage production this is one to keep an eye on.

Mike Bennett's re-imagining of Edgar Allen Poe is rip crackingly amusing. Poe is channeled through Bennett's devious creative mind, fashioning a ribald, rascally and irreverent alternate Poe Universe in which outlandishly large noses, chemical dependency and lunacy are ciphers for his wickedly keen satirical sensibility. Delivered with a wonderfully fruity plum in the mouth and a wan wink in the jaundiced eye, Bennett masters a beautiful array of character voices whilst Gothic strings and acidic sonic FX wrap you up in a very engaging 40 plus minutes of warped joy. Yes, a Poefect Christmas gift.

What did you love best about Poezest?

The sound effects and the Narrator brings the story to life

Which character – as performed by Mike Bennett – was your favorite?

Mike Bennett truly captures the mysterious character of Poe but also describes the various scenes in such a detailed fashion that you could not help but chuckle. The Narrator, the sound effects were awesome!