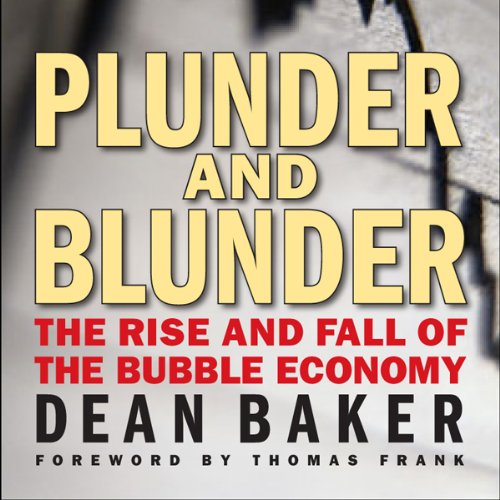 By: Dean Baker
Narrated by: Marc Cashman
Try for £0.00

Twice in the early 21st century, the U.S. economy plunged into a recession due to the collapse of a financial bubble. In this audiobook, Dean Baker argues not only that competent economists should have recognized the developing housing bubble, but also that policy makers and the media neglected those economists who did predict danger.

Baker documents the fundamental policy changes since 1980 that destabilized the economy and eroded the broad prosperity of the post-war period. His expert analysis explains the outcomes clearly so we can prevent similar financial disasters in the future.

"For a more straightforward primer on the crash, the reader cannot do better than Dean Baker's short volume, Plunder and Blunder." ( The American Prospect)

What listeners say about Plunder and Blunder

Dean Baker is a great Economist.

This book is a great listen. I read it 1 or 2 sittings and plan on listening to it many more times. Baker breaks down the causes of the two recent bubbles (the stock bubble of the late 90's and the recent housing bubble), and describes the fallout in detail. I am not very knowledge of this material (yet), but was able to grasp all of his concepts and learned a tremendous amount. For example, he talks about the dangers of an overvalued dollar and the ensuing trade deficit. Some of the concepts were foreign to me, but I was easily able to comprehend them, due to the concise language used by the author.

His critique of Fed Chairman Allan Greenspan was fascinating. He sites an article in the Washington Post where Greenspan implied he didn't know the dangers of the sub-prime mortgage market as he left the Fed in 2005, and didn't bother pass this knowledge on to incoming Fed Chair Ben Bernanke. As if this data was difficult to access for an economist of this stature. This is a reoccurring theme in the book, major economists across the board failed to recognize either bubble. Even though the data was staring them in the face.For anyone investing in the stock market and or housing, this book is a must read. Not to mention the price is right!