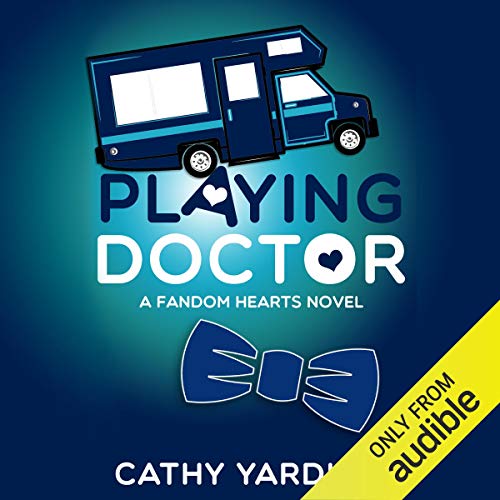 Cressida Frost is in a bind. The home and business she shares with her sisters are in jeopardy as the landlord threatens to sell the property out from under them. Her only hope is to win a four-million-dollar treasure hunt prize, buy the house, and save Frost Fandoms Bookstore and Collectible Shop. The only hitch in her plan: As an agoraphobic, the thought of traveling across multiple states to find the prize is more than daunting.

Noah Sukarno is in over his head. When trouble arrives on his doorstep and threatens his family, he knows he has to win the treasure hunt prize. He and Cressida have known each other for years through the contest fan boards, and he knows she is closer than anyone else to finding the treasure. However, his brilliant plan to volunteer to help her to get closer to the prize may just blow up in his face.

Agreeing to travel together in an RV painted to look like the TARDIS, Cressida and Noah both have a lot riding on finding the treasure. Working together to overcome her panic attacks and his sense of impending doom, they realize that the biggest risk may be to their hearts. Will mistrust and betrayal tear them apart, or will love prove to be “bigger on the inside”?

What listeners say about Playing Doctor

the best one yet

I have read all the Fandom series... I have to say that this one is my favorite one so far. I couldn't wait to listen to some more.

Apologies for not having a Dr. Who quote to summarize my disappointment in this installment. The Treasure Hunt in the Tardis RV set up was pretty good but I cannot forgive that Noah was actively working against Cressida’s best interest for the whole of the story, and only came clean after it didn’t matter. They go on a treasure hunt. It should be fun, with a side of danger. Instead, there was a side of paternalistic “I know better than you” nonsense.

The fault is what I consider to be a cousin to the “Big Misunderstanding”, the “Threat Withheld”. (Cressida overheard Noah and she understood him perfectly.) Basically, I hate when characters keep relevant details related to the safety of other grown adults a closely held secret, try to solve it themselves so they don’t lose face, fail, repeat, and STILL do not inform the other characters of their danger, nor allow them agency in the resolution of the situation. I Hate it. (aside: The key failure in early Dresden Files novels is that Dresden does this constantly.) I’m not advocating that all romantic partners need to fess up their whole backstory and every misdeed before a relationship gets established. I’m advocating that, when a person you know is explicitly threatened, you tell that person about the threat. Then you work *together* to resolve the threat. It can maybe be ok to withhold at first if you think the problem is small and you can make it go away on your own, but that wasn’t the case here. And even if it were, by the 2nd failure of going it alone, bring your partner in, or why be partners?

I overlooked the bind Cressida is in regarding her home’s landlord selling the place. He’s selling and giving them first refusal. But! The bind of “landlord won’t accept offer from Cressida’s sister’s partner” is nonsense. Money is fungible. If he has the money (guessing 1-2 million) to buy the home outright, or even provide 20% of it for a down payment, the landlord never needs to know where that money comes from. Then, there’s a late “rescue” (not spoiler) where a billionaire lends the sisters a private plane. So the money emergency is nonsense, but I rolled with it because Cressida used it as motivation to expand her ability to deal with her agoraphobia. If *she* needed to think the treasure was the only way? Fine, it’s why I rolled with it. But they absolutely had access to enough money from people who would give it to them as gift or low interest loan. They could have just done a treasure hunt with Cressida getting frustrated at working remotely.

Noah being concerned that the villain would (try to) get his mom deported was not nonsense. ICE is straight up evil and should be abolished. What was nonsense is that instead of telling her so she could preemptively get a lawyer and be prepared, Noah went on a treasure hunt that might bit have been successful, with success being the only way he could “save” his mom from harassment. I get that they don’t fight “the man” but he had at least 3 good opportunities to tell her details and didn’t. (mild spoiler) Where it really went off the rails is when the villain sent the goons after his mom before the deadline. Whether or not she gets deported, once she’s in the system, 90% of the damage is done and the villain has zero control over the outcome, so he gave up his bargaining chip. But Noah was too in his head to realize it and Noah made bad choices to avert a crisis that had already happened. (/end mild spoiler)

Additionally, the threat to Noah’s mom was also a threat to Cressida’s financial security and possibly her physical safety. Telling someone about a direct threat to their quest should be done in the planning stages & Noah should have told her before she left her house. Even allowing him to be a bonehead acting in bad faith while convincing himself he’s a hero, once the fight happened, he needed to tell Cressida about the threat. There is NO good excuse for him not coming clean at that point. He has multiple opportunities to fess up and doesn’t.

Which brings me to a glaring discontinuity error. Noah gets beaten up. He is punched at least once, lands on the ground, and gets kicked. These are injuries that need at least cleaning and mild first aid, but once they get back to the RV, he’s magically cured, no one has any bruises or stray bear spray residue, and they go on to gave some miracle sex. “Miracle” because someone who was kicked by a large guy is going to have big bruises somewhere, and they are going to hurt. The author needed to make the fight less intense or have some acknowledgement that the aftermath of getting punched and kicked isn’t a good time. But the fight vanished like it never was, Noah keeps withholding threat info, and they get their groove on with no impediments from the fight. It’s like that scene was written before the fight and the Tardis made time wibbly wobbly. Or it was an error.

I have other issues that are too spoilery. Suffice it to say their favorite mystery author is a bit of a sociopath for being amused at people dying while questing for his treasure.

Telling someone “You did what you thought was best” is OK when one is doing their own thing that only affects them. It’s NOT OK when they’re doing what they think is best for *someone else* when that someone else is an capable adult who has autonomy. It’s withholding consent to run someone into danger because “you did what you thought was best”. No! My blood boiled. The only reason this didn’t get one star was I finished it and otherwise dig the fandom series. As long as I had hope Noah would come clean in time, I was still kind of rooting for them. But he didn’t, the dope. Then Cressida forgives him without him ever acknowledging that *withholding vital information* and *failing to work as partners to solve the crisis* were his errors that he needs to avoid in the future. I gasped at the injustice. Ok, regressed my story rating to one star. This wasn’t a romance. It was a quest with one person collaborating and one person planning theft who stayed on his own side until forced to come clean, but felt really bad about it.

Steam: Med-Low. M/F on page once. There’s miracle sex where a F virgin gets her groove on with a M guy who’s been beaten up but it’s not problematic for either of them. I liked that she was prepared and not ignorant. I did not like that he was lying to her and was miraculously unharmed. I’m glad for them that it was a good time, but no.

Narration: Saved the day. Might not have finished if not for being able to fume and distract myself while Noah was working at cross purposes to Cressida, who has anxiety related to trust issues.

Other books rock, this only angers

I want to start off by saying that I've really enjoyed the rest of this series, some more than others. But this one....no. I was rooting for Cresseda to NOT get the guy, because she deserved so much better than the back-stabbing, betraying Noah. Yes, most of the time one the MC does something stupid, the couple fights, makes up, and ta-da! HAE. But some things just can't be forgiven, I don't care what amends or apologies are made. Once again, she deserves so much better.

Aside from the story, the writing itself is as good as the rest of the series, and the performance was really good, too. It's just the story arc that leaves me wanting. It's a shame, because the idea of a treasure hunt is actually really neat.

Best in the series!

This was the best in the series for me because it had a little bit more depth than the other books. I really liked learning more about Crisetta and that there were a lot of details about her condition and her history. I also really liked that she wasn't portrayed in a stereotypical way, but was strong, determined and willing to do anything for her sisters and for what she believed in. And the fact that all this was weaved into a fun adventure made it even better!