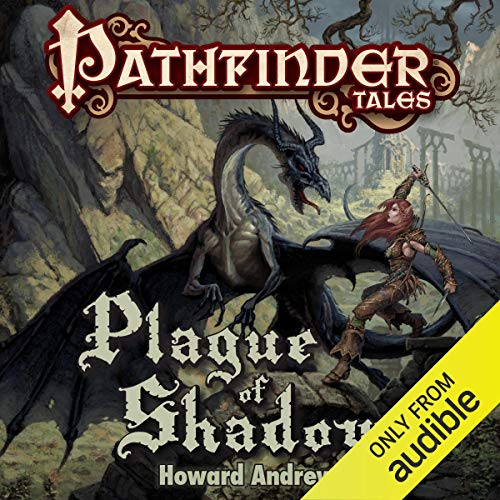 By: Howard Andrew Jones
Narrated by: Dina Pearlman
Try for £0.00

A fantastic new adventure of swords and sorcery, set in the award-winning world of the Pathfinder Roleplaying Game! The race is on to free Lord Stelan from the grip of a wasting curse, and only his old, half-elf mercenary companion Elyana has the wisdom - and swordcraft - to solve the mystery of his tormentor and free her old friend before three days have passed and the illness takes its course. When the villain turns out to be another of their former companions, the half elf sets out with a team of adventurers across the revolution-wracked nation of Galt and the treacherous Five Kings Mountains to discover the key to Stelan's salvation in a lost valley warped by weird magical energies and inhabited by terrible nightmare beasts.

What listeners say about Plague of Shadows

Very standard rpg story, fine to kill time when travelling but no suprises. Voice actor was ok though make voices did sound a bit strange to me.

Of the pathfinder tales I've listened to, this recording was really rough. I liked the story enough but wasn't my favorite PF tale.

good book and story for Pathfinders, but the narrator is tinny and sounds like she's in a closet

This story has a little bit of everything; love, betrayal, a quest, and dragons. Though a little slow to start the story picks up pace and immerses you in the adventure. Definitely worth the listen.

good range of voices, and keep them spot on throught the book. At the beginning there is a small room echo effect that goes away later. A captivating story with a perfect amount of details to make you ever present in the always shifting shadows.

This stunning book is an awesome example of the Galorian setting. Who would have thought that an old adventuring group still had sho much to give. awesome story.

while the main character feels wooden at first its nice to see her develop as the story goes on.

I love the Pathfinder books. A good adventure with great narration by Dina Pearlman. I had read that her voice came off as tinny, but I think the quality was good overall. The characters are good and while the main baddy doesn’t have much to them, this is a story I can see myself playing with my group. I recommend this to all Pathfinder fans.

Fascinating exploration of the Plane of Shadows

I love all of these Pathfinder Tales and Chronicles, both for their great stories and for the idea fodder they provide me for the PF campaigns I am running. This one was particularly helpful as I’ve recently been maneuvring a few of my campaigns thru the Planes. I ran a fantastic adventure in Hell for one group and took another on a memorable romp thru the Astral Plane and some demiplanes of my creation, but I’ve been wondering how to run something in the Plane of Shadows; this story was absolute GOLD for me!!

Storywise, this one was unpredictable and fast paced, with complex and enjoyable characters running the show. Dina Pearlman did a great job, too, especially her portrayal of the gruff half-orc Drelm - I’m also planning on “stealing” this speaking style in my campaigns for any gruff NPCs that I need to run!

I highly recommend a Plague of Shadows.