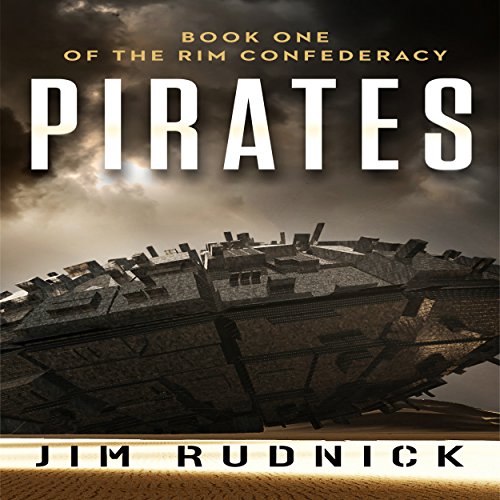 "anner Scott, a RIM confederacy naval officer, has fought many battles against both humans and aliens. Years ago he proved victorious against a band of aliens. His ongoing fight with his own alcoholism, however, remains a stalemate.

And suddenly pirates have appeared on the RIM. They have kidnapped the passengers of many craft sand sold them into slavery, and Scott is ordered to find them and rescue them.

But the pirates aren't acting alone. They are sponsored by a powerful royal with ambitious plans, and she isn't about to let some navy captain stand in the way of her mining empire. Scott must rescue the slaves while simultaneously navigating the treacherous space of interstellar politics.

If he fails, a royal will gain more power, the entire confederacy may unravel, and Scott's alcohol addiction will be the least of his worries....

What was one of the most memorable moments of Pirates?

If you could sum up Pirates in three words, what would they be?

What does Eric Martin bring to the story that you wouldn’t experience if you just read the book?

Subtle intonation and inflections to help know who is who and to help the listener better understand the emotion of the situations.

Laughed my butt off a good few times

I would serve on this man's ship anyday.

What did you love best about Pirates?

The story line was knitted together well and developed in such a way that it actually got better as it progressed. The reinvention of the main character was well done and you could actually connect with the characters.

What was one of the most memorable moments of Pirates?

When the young girl was able to prevent the death of her group as they were rescued.

Which character – as performed by Eric Martin – was your favorite?

While Tanner Scott was the most prominent I thought the narrator did an outstanding job on all of the characters. The voice inflection was great and very clear and understandable.The amount of emotion he put into each character was great. It made each one feel more real to you as you listened to the story unfold.Without a doubt one of the better narrators I have listened to in quite some time.

It built excitement. Initially starting with a disgust and building up to a higher regard for the characters.

This book left you exited for the main character and his crew. You knew there had to be more and the ending left you expectant for resolution. This story line was a new twist on the space opera and was not too deep into the technical issues of getting from place to place and had a great deal of actual action involving the characters of the story.

While I'm usually not much for any type of sci fi. I did enjoy this. It's action is quick yet it's still easy to follow. I only went with three star as the author does seem to dwell on some of the facts over and over. Like the main character being an alcoholic.

I was given a free audio version of this book for review. The narrator did a good job with keeping the story line moving.

It showed promise at the beginning, but quickly faded, falling short of the built up expectations.

A really great start to a series

This book deals with a Naval officer and his crew in The Rim Confederacy, an alliance of planets on the Rim of the Galaxy after a diaspora of sorts.Tanner Scott is just whiling away the days as a Ships officer when the ship is attacked, and his CO and 1st officer are killed, leaving him in charge. He miraculously, or so it seems, fends off the pirates that attacked them, looking like a hero. IN fact, he is, having been a hero ina previous conflict that left him with PTSD and Alcoholism. He is given a new ship, and given a mission to track down the pirates. The story revolves around that mission, showing POV from both sides, as well as some smaller plot lines too, all ending in a satisfactorily explosive conclusion.The characters, Especially Tanner, are engaging, and you can't wait to see where thir story goes. The setting is well laid out, and the plot moves along well, with lots of actions and no unnecessary exposition. Any fan of Jack Campbell or H. Paul Honsinger should enjoy this book. Eric Martin does a great job of bringing the story alive, really bringing the listener into the action. A must read for any sci fi fan.

I was given a review copy of this audiobook from the narrator at no cost in return for an honest review through Audiobookblast dot com.

The description sounded good. I really wanted to like this book. The story did not seem to flow. The constant reference to Scotch was annoying, but overall it wasn't bad. This audiobook was provided by the author, narrator, or publisher at no cost in exchange for an unbiased review courtesy of Audiobook Blast."

The narration comes across snarky and overpowering

I tried to like this, but the narration is annoying at best and seems intent on ginning up the insipid story line--an impossibility. Yet another two-dimensional alcoholic "hero," aimlessly wandering from adventure to disconnected adventure in space.

What would have made Pirates better?

They could of focused on the investigation or fights with pirates instead of 'the bumbling adventures of captain alcoholic'.

Has Pirates turned you off from other books in this genre?

Focused more on the investigation and not just relied on psychics to just magically know everything.

What character would you cut from Pirates?

The main character. He can't find his way out of a wet paperbag, oggles every women he mets and needs the bad guys handed to him on a silver platter.

I wanted to like ‘Pirates’, but in the end I couldn’t get over the lazy scifi and cringe-inducing writing. The concept has all the necessary points needed for good, light-hearted popcorn scifi: Space navy, pirates, captain with personal issues to overcome. Yet many aspects were just borrowed from pop culture scifi: FTL, tachyon drives, shields, even the ‘Picard maneuver’. Oddly other aspects of the universe don’t feel thought out at all. This is hundreds of years in the future and people are still using buttons and the naval academy still hands out paper textbooks?

All this would be forgivable if the story was action packed and enjoyable. But after the initial pirate attack, they get sidelined for a significant portion of the book. Fine because the book is really an exciting investigation thriller about how the Navy drives the pirates out into the open, right? Wrong. The characters just fumble around aimlessly under a psychic who can see into the future tells them exactly who the bad guys are and what to do to catch them. How are we suppose to care about a bland character who just does what he’s told to do.
Lastly the writing is nothing stunning. Two of my favorite examples: “As always, we welcome you with our welcomes.” and “He shook his head in the negatory manner.” Wow, just wow. Not all of it is that bad, but you get my point.

At least the audiobook narrator had some fun with it. Something Mark Hamill-esque about it made it the most enjoyable part of my listening experience.

i found it a bit dull

Would you try another book from Jim Rudnick and/or Eric Martin?

of course. there might Always be a book that catches me

What was most disappointing about Jim Rudnick’s story?

i bit repetitive in the main character - the redemption of a man ... etc

What character would you cut from Pirates?

all of them? seriously there's nothing really bad with the book, is just repetitive in the idea and frankly a bit dull for my taste.