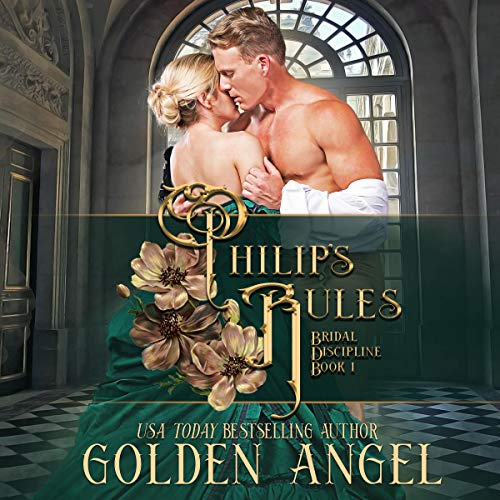 By: Golden Angel
Narrated by: Brian Briar
Try for £0.00

Married once to a Baron who needed a young bride to bear him an heir, Cordelia Astley found herself in an untenable situation after his death, until Philip Stanley, the Marquess of Dunbury, asked her to be his bride. She knows he didn't marry her for love, but he was her white knight, and once they're married, she finds herself falling in love with him. It would be a fairy-tale ending if it wasn't for her stepdaughter, Gabrielle.

Having observed his cousins Hugh and Eleanor find happiness in their respective marriages, Philip doesn't see why his marriage should be any different. Especially since he managed to find a giving, submissive, delightful woman that drew him like no woman had ever done before. Everything would be perfect, except that she allows her stepdaughter to denigrate her and manipulate her. His method of correction for both Cordelia and Gabrielle isn't what either lady expected, but Cordelia finds confidence in his support and care of her.... If only she would put him first instead of Gabrielle, Philip's life would be everything he'd hoped.

A sexy spanking tale of desire, passion, and love, Philip's Rules is the first of a new series spin-off of the Domestic Discipline Quartet (you do not need to know the quartet to enjoy this audiobook).

What listeners say about Philip's Rules

I really enjoyed this storyline not only was there lots of spankings which is always a good thing in my book but it also shows how things were back in the day. How ladies were expected to behave and what would happen if they didn’t. Great performance from Brian.

Enjoyable addition to the series

Having read all of a Golden Angel’s Domestic Discipline books it was good to meet up with some of the characters again in this book. Sadly I think this particular book is better read then listened to as I didn’t think the narrator was any good at doing female voices.

However, the performance of the narrator was horrendous. You can't make out certain bits, It's like he was a first time narrator with zero experience, recording in his living room with nothing to cancel out the background noise. Unfortunately, it made the book hard to listen to.

I love this story and read as an ebook. I was unable to finish the audible version because of the narrator. I tried 3 different times to continue and I just couldn't. Love the story, just not the narrator for this story.

Domestic discipline is a genre I enjoy reading. The twist of this being Bridal specific and in a historical time setting is different for me. I enjoy this book from the beginning. It was equally sensual, humorous, strictly disciplined, and loving. I especially enjoyed Gabrielle's antics and her attempts to avoid responsibility. Brian Briar did an great job with the narration especially since there were so many different active characters. Looking forward to continuing this series.

Enjoyed the story, took me back to the days when I read mostly historical romances but none were like this. The narration I found a bit stilted and seemed contrived to me but is probably meant to convey the aristocracy of the times.

Like the first series the writing is superb.
The narrator doesn't pull off the English aristocracy. He doesn't have any accent and just sounds wrong. There also were some places where I didn't know what he said, mispronounced words. I think he would have done better with American characterizations. He was for the most part listenable. But he was wrong for this book.
I'll probably still listening to this again but probably not as much as the first series to this second series.
This audio book was given to me for free at my request from the publisher or author or narrator and I provided this unbiased voluntary review.

I liked the story but hated the narrative. He sounded like he was sitting in the bathroom reading and the voices he made for the women made me actually laugh

Terrible narrator. Ruined it for me.

The narration was poorly done in this audio book. the story is good, and after listening to the domestic discipline series I was eager to listen to this series. as I first started to listen to this book I cringed at the beginning because the narration was so bad but I forced myself to finish it just to get to the end of it so I could continue the series and hopefully the other books would be enjoyable.

I couldn't even get through chapter 1. The narrator has the voice of a teenager. I' will read the book to find out if the story is as interesting as I thought it would be.

This had way more sex then I expected. But if you like lots of that you will be happy. I prefer much less but that is only my preference and I do not hold it against the story. The characters were typical but I liked them. I like historically set books and this was done well. Hearing a man do a womans voice was to comical at times and I think distracted from the story. I would prefer if they would have a man and a woman narrate. It would really help us listeners be in the moment of a scene instead of laughing at a guy trying to be a girl and vice versa. Hearing the man narrate sound effects was to funny. One particular scene used a certain kind of sex as punishment which was off putting because it tried to make it sound loving but it wasn't. This is an average story with average narration but worth the listen.