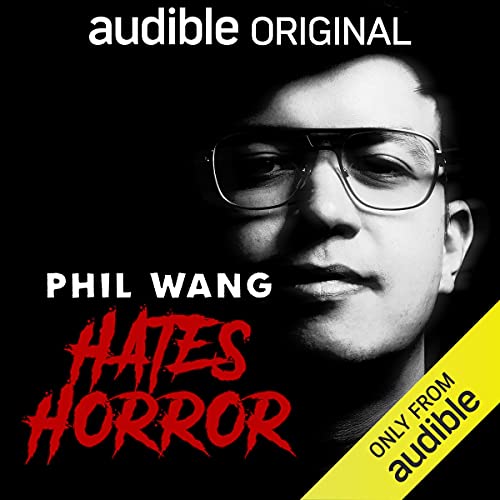 Really enjoyed this, the nightmare on elm street episode is my favourite. Really good fun!

If this is the sort of thing you enjoy...

Frankly, you're welcome. I managed a couple of sections but even housework wasn't dull enough to keep listening.

No depth, no humour

Considering the participants are comedians, this was decidedly unfunny. I love the concept of someone who dislikes horror watching the horror recommendations of select friends then chatting with them about it, but it comes across as over produced and boring. The conversations rarely go into the chosen movies in enough depth to satisfy, and there's this faux-scary voice announcing the titles of each segment which completely breaks the rhythm of the conversation. As far as I can tell Phil Wang doesn't hate horror at all: he hates gore, which isn't the same thing at all.

A funny ode to horror

A really funny look at horror from the perspective of someone who hates it (Phil) and someone who loves it (the guests). Funny banter and I learned about the films too. In fact this made me want to watch them all!

It was very enjoyable. I would love more please. great format and interesting/funny conversations.

If you liked Phil Wang on Taskmaster, Room 101 and his other television appearances, you’ll like this. It make me laugh a fair few times and as a horror fan I found it fascinating. I hope they make more because I love the Wangster.

I found the whole concept brilliant, was interesting and funny! Will defo look out for further series 😁

Loved this, really easy to listen to 😊
Hoping there will be more, even if Phil has to watch films he hates!

really gentle funny take on some.good horror films. I listened first and then watched the film. I also don't like horror. but I absolutely loved watching them after hearing someone talk passionately about something they love. enjoyed IT so much, I watched them both and would happily watch them again. brilliant. more of this please.

Audible has gone to a new low with this one. This podcast premise is a complete rip off of the wildly popular Podcast The Horror Virgin, which has been going strong for nearly 3 years. it has millions of downloads and a very strong fanbase. instead of taking credit for The Horror Virgin crew's ideas, Audible should have invited them to join the Audible library. zero stars wouldn't recommend. if you want a great podcast, check out The Horror Virgin.👍

I love Phil Wang and his hilarious guests, and I'd listen to them talk about anything - even horror movies. I hope they come out with more episodes soon!

Read the other reviews here. This is a blatant rip-off of the Horror Virgin, who has been doing this much longer and way better. It’s sad that Audible/Amazon chose to steal a concept from people who have busted their butts for years to create something special, but I guess we shouldn’t be surprised.

This is such a great premise for a podcast. Unfortunately for Audible, it's already been done by a podcast called The Horror Virgin, and the sad fact is, Horror Virgin has been doing it better for years. What's really sick is that The Horror Virgin even ran ads for Audible once upon a time, with amazing book recommendations, so Audible can't even claim that they didn't know what they were doing.
If you want a great horror podcast that is both hilarious and well done by people with an ORIGINAL idea, check out the Horror Virgin available everywhere you get podcasts... except for Audible.

But best to listen if you have already seen the films. Otherwise both the humor and analysis gets a little lost on you. I really enjoyed hearing about some of the behind the scenes stories about the film. Great concept for a podcast and really enjoyed it!

This podcast is a complete rip-off of Horror Virgin. Go check out Horror Virgin, instead. HV has been around for years and the hosts are fabulous.

Blatant theft of premise from The Horror Virgin

It blows my mind to see Audible, who previously sponsored The Horror Virgin, up an steal the whole concept of their show. Horror fans vs one horror Virgin, a scary scale, comedic theme and comedians on the show, the whole thing.

Everything here The Horror Virgin currently does and has been doing since 2018. THV is clever, hilarious, and kind on sensitive topics, and has a huge, active, supportive fan base and community. Three years going strong and millions of downloads.

The Horror Virgin is fantastic - just go listen there!

Listen to The Horror Virgin

This is a rip off of The Horror Virgin Podcast. Don’t waste your time with this knock-off.

I hope this was an accidental rip off