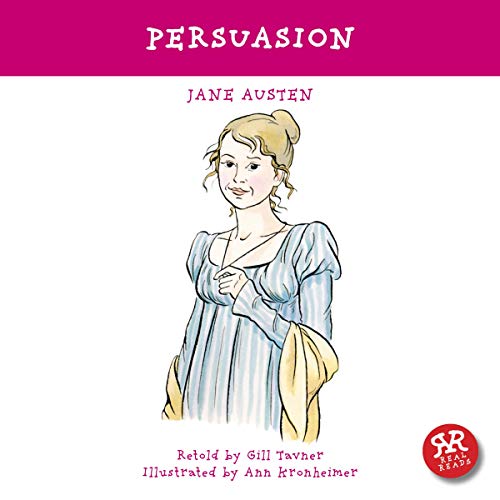 By: Jane Austen,Gill Tavner
Narrated by: Sally Lewis
Try for £0.00

Persuasion is one of a series of retellings of classic literature by publisher Real Reads. True to the original plot, characters and themes, Real Reads also imitate the original author's style. An intelligent, lively and enjoyable introduction to this classic tale.

Eight years ago, Anne Elliott was persuaded that her family's honour was more important than her own happiness. She has suffered ever since. Now the man she turned away has returned. Can Captain Wentworth forgive Anne, or will he be charmed instead by the beautiful Louisa? Will Anne be persuaded to marry her cousin, or will she find the strength to follow her heart?

The extravagance of Anne's foolish father, the greedy plotting of false friends, and a near-fatal accident bring danger into Anne's safe world. Their hearts assailed by resentment, regrets and rivals, can Anne and Captain Wentworth now reach across the void that separates them to love each other again?

“The perfect introduction to the pleasures of Jane Austen’s work; pleasures which may well last a lifetime.” (Caroline Sanderson, author of A Rambling Fancy: In the Footsteps of Jane Austen
“As Gill Tavner points out in the footnotes to her Real Reads, ‘Nothing can beat the originals’; but where a novelist of Jane Austen’s calibre and formidable reputation is concerned, some introduction to the originals may be invaluable for the uninitiated. These lively, attractive little volumes are ideal. Charmingly presented and skilfully written, they capture something of the flavour and tone of Jane Austen’s peerless craft, while simplifying the narrative and dialogue. Even as a purist, I think these Real Reads are a Real Help for the younger, novice reader.” (Josephine Ross, author of Jane Austen: A Companion)
“Real Reads will appeal enormously to young people who have seen the adaptations and are looking for a book that fulfils the same function. We expect to sell a lot of copies.” (Ann Channon, Jane Austen’s House Museum, Chawton)

What listeners say about Persuasion