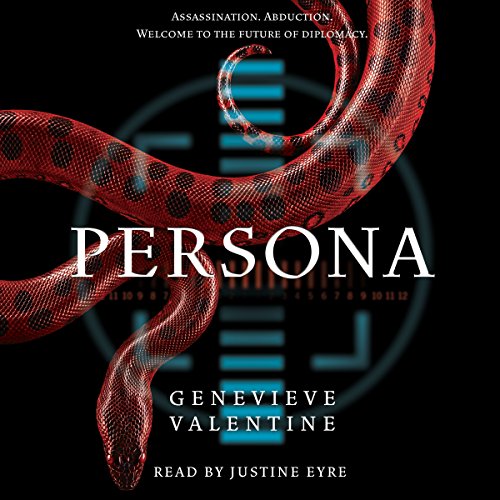 In a world where diplomacy has become celebrity, a young ambassador survives an assassination attempt and must join with an undercover paparazzo in a race to save her life, spin the story, and secure the future of her young country in this near-future political thriller from the acclaimed author of Mechanique and The Girls at Kingfisher Club.

When Suyana, Face of the United Amazonia Rainforest Confederation, secretly meets Ethan of the United States for a date that can solidify a relationship for the struggling UARC, the last thing she expects is an assassination attempt. Daniel, a teen runaway turned paparazzi out for his big break, witnesses the first shot hit Suyana, and before he can think about it he jumps into the fray, telling himself it's not altruism, it's the scoop. Just like that Suyana and Daniel are now in the game of Faces. And if they lose, they'll die.

What listeners say about Persona

This Book Isn't Designed for an Audible Read

Very little could have been done to make this a better experience. I took a look at the physical book in the store and confirmed that there are several lists and threads of consciousness in the storyline that, unless you're reading the physical page, are very hard to follow in an audible format.

I enjoyed the voice of Genevieve Valentine. She did her best to read Persona aloud, but unfortunately it's not a book that was designed for audiobook format.

What other book might you compare Persona to and why?

I'm not sure, exactly. It certainly isn't as bad as 'A Clockwork Orange' would be if that were read aloud, but that gives you a bit of an idea of the confusion experienced.

Very little could have been done to improve the performance. I took a look at the physical book in the store and confirmed that there are several lists and threads of consciousness in the storyline that, unless you're reading the physical page, are very hard to follow in an audible format.

I enjoyed the voice of Genevieve Valentine. She did her best to read Persona aloud, but unfortunately it's not a book that was designed for audiobook format.

If you could play editor, what scene or scenes would you have cut from Persona?

I made it to the end and still cannot tell you what of importance happened. It ends as if there's a great revelation to be announced, but I don't see how that's possible. Poor writing actually. No grounding in whatever the parameters of the world of the story are so you have no idea what's really going on: in some amorphous Rollerball-ish way there is a sense that news hawks and paparazzi and "snaps" (photogs) are a major force in some global politics but that's about it. There is little or no delineation of the relationships of the characters, whether to each other nor to the organizations they work for. A friend listens to same books as I do and we discuss them but neither of us followed this story well, (what story there is) and neither of us cared to finish, though I did.

In the interest of trying some of the new authors and current "respected" novels I've looked at various reviews and sites. This is another that was on some list of best SF books of last year or year before and so far from that list we've listened to at least 3 and none of them have been great. I do not understand how some of these things get published for one thing, but then to have someone tout them as best of a year does not speak well of reviewer/listmaker nor does it speak well of the reading public that thinks mediocre writing is phenomenal. Will probably return for refund though it isn't really Audible's fault that it got put out there. To think of all the actual well written, thought provoking SF and lit that I keep hoping will get narrated, and then to come across this dreck.

And I read the other review of this here and don't agree with the Clockwork Orange bit as I had no trouble following that, nor some other far more challenging writing like Stand on Zanzibar or Sometimes A Great Notion, and I could go on.