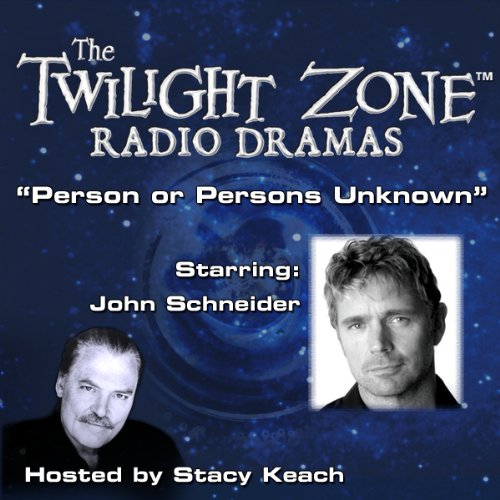 David Gurney wakes up to another ordinary day. Except today, nobody knows who he is.

What listeners say about Person or Persons Unknown

Great opening to the story. Followed by an increasingly frantic desperation. Today's identity thefts has nothing on what Schneider's character endures. The soft spoken psychiatrist adds to the creepiness. Great episode.

I Think, Therefore, I Am

If you could sum up Person or Persons Unknown in three words, what would they be?

What other book might you compare Person or Persons Unknown to and why?

There have been many stories about people's identity crises. From man's earliest beginnings, Descartes questioned existence in his famous quote, "I think, therefore, I am." The epistemology of one's existence has been explored by scientists, poets, and writers for thousands of years. "If a tree falls in the forest, does it make a sound?" Does a person have to be in the forest to hear the tree fall? Or does the sound occur no matter if anyone is there to observe the sound?

What about Stacy Keach and John Schneider ’s performance did you like?

Stacy does the intro and end just as Rod Serling did in the TV show. John Schneider's portrayal of a man who cannot understand why people do not recognize him was compelling and makes one feel strangely if the same thing would happen to the listener. John acted just as a reasonable person would act in that situation trying his best to secure his place in this world. He would not take anyone's explanation that he had a break with reality, but none of the evidence supported his view. The twist in the end was not anticipated. At that time, he became indignant just as his wife did in the early part of the story. Excellent performance, very visual, and entertaining.

Yes, anyone would feel discomfort if his whole belief system were destroyed by his wife, mother, and employer not believing in his existence. I could actually feel the character's anxiety at finding that no one believed him. What I did not like was that there was no actual explanation for the reason that David Gourney's existence was in question.

Charles Beaumont was a prolific sci-fi writer for Twilight Zone eps, but I did not care for this story only because there was no explanation in the end. The twist was a typical kind of ending that leaves the listener thinking "what happened?" I prefer an ending that makes sense as in "Where is Everybody?" Rod Serling did not insult the audience's intelligence. Other writers often do, but it's not satisfying to the listener. John Schneider did an excellent job as usual in his portrayal of David Gourney fighting for his survival of existence. I would love to see John Schneider perform more of the Twilight Zone radio shows.