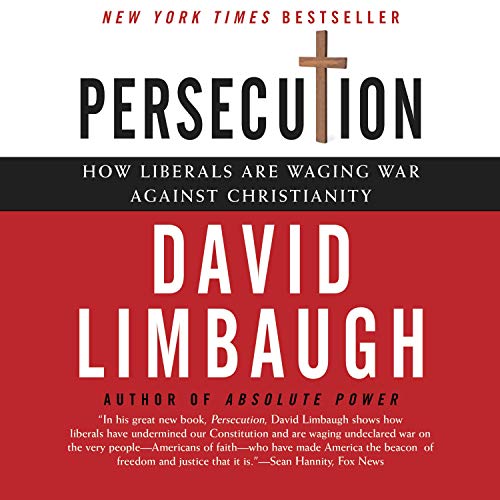 In this New York Times best seller, David Limbaugh exposes the liberal hypocrisy of promoting political correctness while discriminating against Christianity. From the elimination of school prayer to the story of Christianity in America being eradicated from history textbooks, this persuasive book shows that our social engineers inculcate hostility toward Christianity and its values in the name of diversity, tolerance, and multiculturalism.

Limbaugh explains through court cases, case studies, and true stories, the widespread assault on the religious liberties of Christians in America today and urges Christians to fight back to restore their first amendment right of religious freedom.

What listeners say about Persecution

I was pleasantly surprised by this audio book. Mr. Limbaugh?s reading is a bit dry, but his voice is clear and easy to listen too.

The books does exactly what the author intends. It draws a clear picture of the growing anti-Christian bias in our society. Whether intended or not, Christians and the Christian worldview face increased hostility in a postmodern world. Mr. Limbaugh makes good use of actual events and court decisions to prove his thesis.

Whether one agrees with this position or not, I highly recommend the book.

Required Reading at its Best

I believe that every parent every K through 12 grade student as well as College students,should be required to read this book and be aware of the subtleties, which have become standard practice attacking our Christian faith in the United States especially through the education system and in our political system. David Limbaugh doesn’t excellent job of identifying and summarizing many of these actions.
Should be required reading for all families and not just read by the parents.

Not the first book I would get on a premiem subscription to audible, but it is up there. Overall a good book.