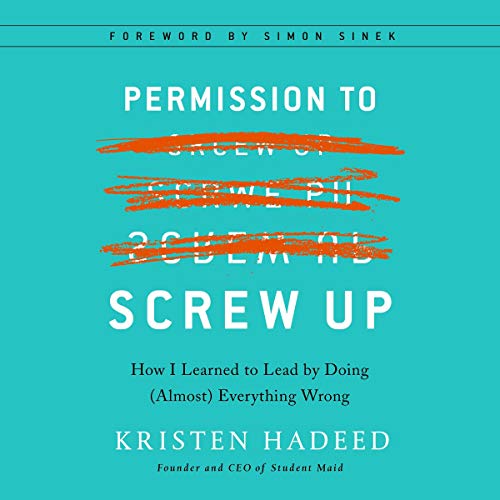 Permission to Screw Up

The inspiring, unlikely, laugh-out-loud story of how one woman learned to lead - and how she ultimately succeeded, not despite her many mistakes but because of them.

This is the story of how Kristen Hadeed built Student Maid, a cleaning company where people are happy, loyal, productive, and empowered, even while they're mopping floors and scrubbing toilets. It's the story of how she went from being an almost comically inept leader to a sought-after CEO who teaches others how to lead.

Hadeed unintentionally launched Student Maid while attending college 10 years ago. Since then, Student Maid has employed hundreds of students and is widely recognized for its industry-leading retention rate and its culture of trust and accountability. But Kristen and her company were no overnight sensation. In fact they were almost nothing at all.

Along the way Kristen got it wrong almost as often as she got it right. Giving out hugs instead of feedback, fixing errors instead of enforcing accountability, and hosting parties instead of cultivating meaningful relationships were just a few of her many mistakes. But Kristen's willingness to admit and learn from those mistakes helped her give her people the chance to learn from their own screwups too.

Permission to Screw Up dismisses the idea that leaders and organizations should try to be perfect. It encourages people of all ages to go for it and learn to lead by acting rather than waiting or thinking. Through a brutally honest and often hilarious account of her own struggles, Kristen encourages us to embrace our failures and proves that we'll be better leaders when we do.

"A brave and generous book, the ideal antidote to the perfection and invulnerability we pretend are essential to succeed.” (Seth Godin, author of Linchpin and Tribes)

“Permission to Screw Up pulls back the curtains and reveals what it’s really like to be a leader - a must-read for anyone who wants to start a company. Kristen isn’t afraid to own up to the mistakes she’s made along the way, and encourages us to do the same.” (Kip Tindell, cofounder and chairman of The Container Store)

What listeners say about Permission to Screw Up

My new go to resource on humane & effective leadership

A really wonderful, engaging and insightful book on leadership. Whether you’re an experienced leader who has studied the theory, got the t shirt etc, or brand new to leadership, or starting up a new venture if your own, this book will help your thinking, and I hope, inspire you. I listened on Audible and my commute was transformed. Kristen is a great story teller, really bringing to life her ‘screw ups’ and the deep learning that followed. So much of her success is her people focus and the attention she has paid to relationships, values and honest feedback. She shares her insights generously and and also attributes and thanks the others who have helped along the way. I am already boring anyone who will listen to me with my recommendation to read or listen to this book. I’m delivering a 2 hour overview on leadership theory imminently - no mean feat! This is one of 4 books I am specifically referencing.

Inspiring and entertaining tales of leadership

Refreshingly candid and open tales from leadership that are both inspiring and entertaining in equal measure.

If you want to learn then this is a great book to listen to. Game changer.

Amazing life changing story already helped me so much in our business and my personal life THANK YOU SO MUCH !

Kristen delivers a no holding back step by step account. some real surprising honestly from a successful entrepreneur

worst book ever that I have read. maybe some little teen would enjoy this kindergarden story

Possibly the most authentic book I have ever had the pleasure of experiencing. Kristen offers up something that most try to hide and shares those human traits that can provide lessons we are sometimes not expecting to learn. I didn't buy the book expecting to to cry in chapter 5 but the lessons the book imparts provide something everyone can grow from

Honest and vulnerable stories of growth

Easy listening of a young person's journey and the true struggles to find her way to a strong leadership role. Nothing is perfect but the struggles are what she is most proud of.

Loved this book. Well written, well thought through. Really fascinating to read /listen. I have finished it really fast.

Every leader should read !

Great book from real work life experiences and people , fully 100% agree you need to be allowed to make mistakes and learn from them.

Everything I Needed as a Millennial Manager

This book was everything I needed at just the right time. In the midst of struggling to find a way to align my leadership goals with a “behind the times” company culture, I was starting to doubt myself and my mission. After hearing Kristen’s story and being able to identify with the majority of it in one way or another, I feel like I have been able to refocus on what truly matters to me as a leader. Leadership is incredibly difficult when you are saddled with the title and responsibilities of [insert title of influence here]. No wonder so many seniors/executives have lost their leadership paths in a jungle of conflicting organizational cultures. Simon pointed out that people pulled out their notepads and listened when Kristen spoke; as they should. What she has to say is absolutely invaluable for all levels of an organization. Particularly for those who have lost their way. I am so glad she decided to share her screw ups with the rest of us. Thank you, Kristen.

I was engrossed from the beginning to end, and enjoyed it more than the last 20 I listened to combined. I applaud the authors courage.

Not really a self-help book

Entertaining 'life story' about a young entrepreneur and her trials and tribulations of figuring out business. You think the story is almost too much good natured fun in the beginning to be what actually happened, that true hardships hadn't really been had, but the second half goes a little deeper and is nicely tied together at the end. It's far from a true 'rags to riches story' because the author had a lot of support but I think she raises some good points and tactics that can be applied to business owners. I had a few takeaways. There is some theoretical fluff from somebody that appears to still be 'figuring it out' though. I think there will be future books written by this author because there are still lessons to be had in business that deviate from theory. Not a business bible but overall worth the listen.

Great book. Easy to listen to. I finished in just a few short days. As a business owner it is great to hear that it is ok to mess up from time to time...to be human. After listening to this book I feel a renewed energy to find the best in people and to work as hard to build internal relationships as we do on the external ones!

Easy to listen to!

Kristin is so pleasant and easy to listen to. Hearing her story is almost like sitting down and listening to a story narrated by a friend. Her lessons learned are indispensable and her openness to admit her mistakes is refreshing . This book is deafly something that all leaders and future leaders need to read!

Quick lesson with a reassuring theme - celebrate your mistakes by learning from them. More than that, Kristin Hadeed stumbles on, internalizes, and lives the keys to leadership.

A quick read with big impact

For me, Kristen's story was endlesslessy relatable, and read like a brave tell-all leadership guide for those who put people first. I say that I am a helper first and a salesperson second. I have trouble knowing when to pull the plug on relationships and put up boundaries and as a newer business owner and someone who provides guidance to other entrepreneurs this had me rethinking my leadership approach and leadership team building in some very needed ways. Kristen is super down to earth and my favorite part might be the end where she talks about writing this book and how she knew it was the right book for her. I also love her read of her own book, she absolutely made the pains and victories if her journey come alive!

I loved the simplicity and honesty of this book. more or this type of leadership guidance is needed in our world. the way it was written flowed nicely from one section to the other. Lots of quotables to use.