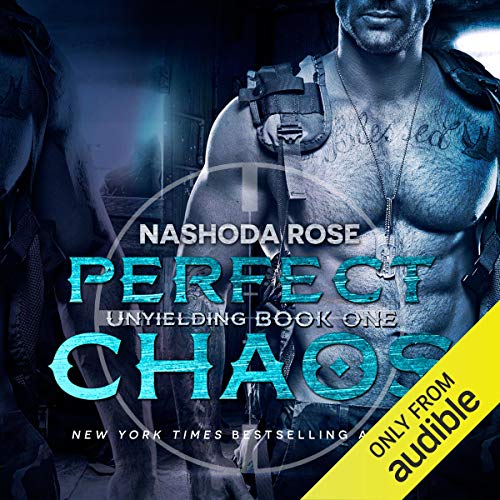 "You're my rainbow. The brilliant colors of you make me whole. Without your colors, I'm just a man living in the dark."

I lie to survive.

Have since I was 16 and my world fell into chaos. But I found a way to endure, or rather it found me. Now I'm a prisoner of my own doing, hiding behind a false mask so no one sees the truth. Not even the man I want but can't have - Deck. But I messed up and the lies are spilling over, out of control.

Deck is unrelenting and will settle for nothing less than the truth. He demands everything from me - EVERYTHING - even if it rips me apart.

I kill for a living.

Unyielding - It's how I survive in my line of work. I bend people to my will...except Georgie. But that ends now. I've played her game for far too long. Now it's time we play mine.

What listeners say about Perfect Chaos

Audiobook was great and the narrators were fantastic. Overall, I enjoyed this book. I did have issue with some of the beginning. I just think the heroine came off way too desperate and that’s just not something I like in a book. I prefer a heroine to have more respect for themselves. I also didn’t like how the hero prevented her from being with anyone when he had no issues with being with other woman. Unfortunately, those two things dimmed my enjoyment of the book. I will say that once these two get together it was pretty easy to forget those annoyances.

The first 10 chapters were hard to follow. I couldn’t tell when we were In flashback mode or future mode.

Too convoluted and drawn-out

Convoluted, drawn-out, and simply a chore trying to remember who’s who in this story.

It takes too long for the main characters to get together and after finally finding out what’s going on, things get more complicated and frustrating.

There are too many loose ends left unanswered at the end, so I didn’t enjoy that part either.

I like resolution, and closure even before getting to the epilogue. Here the epilogue leaves you hanging.

Plot went in one direction initially then doubles back to reveal background with a much deeper storyline. Characters are well developed. Where are the follow-up books?

Beginning was confusing and no conclusion to series 3.5*

It took awhile to be able to understand just what was going on. The story gets better about halfway through. Unfortunately the storyline continues on in the next book and it is not available in audio format. This book was released in 2016 so I am guessing that for whatever reason books two and three which were written years ago are not going to be released in audio.

For this reason I would pass on this one. If I had known that the underlying story was continued on and those books were not going to be available I would have passed.

I love this book, but the audible version is less

I love this book, but the audible version is less compelling. I think a lot if it is because the male's female voices were off-putting, especially in sexual scenes. Honestly though, as much as I adore this book, it would have been hard to live up to my expectations! My advice? Read the book for the full experience, then listen to this for a supplement. DON'T listen in place of reading it, though, because you'll miss out on the emotional roller coaster.

This audio will grab you and just stay with you for a few days or a few weeks. The author wrote a story that will grab you . Right when you think you have it figured out the author throws you another twist and then a turn .
Hero is Deck. Heroine is Georgie .
Georgie loved Deck from when she was 16.... Deck was Georgie brother best friend. Deck made a promise to her brother. So he left.
Grab it and be pulled in
The 3 narrators were great. The voices were clear and they did the characters parts perfectly

Perfect Chaos is the Perfect title for this book

Would you listen to Perfect Chaos again? Why?

yes, great story and many twist and I could have missed something.

Georgie because she is strong and trusting.

The shack a the end when they set up to get the bad guy.

There were quite a few emotions in this story, They did make me sad but some happy.

This is the first book in the Unyielding series. The first book I have read that was written by Nashoda Rose. My first reaction at the beginning was it was hard for me to understand what is going on. At first I didn’t understand the story, but I kept reading, I was intrigued by this story. About Georgie and Deck, who Georgie has had a crush on forever. Deck was her brothers best friend and he wasn’t going to let anything happen to her. This book is intense and dark. The author really drew me in and wanting to know what is going on and how everyone was connected. There are many secrets in this story which makes it very intriguing to read. The characters are developed and while reading you want to know more. This first book makes you want to read the second book. I felt this book was awesome to read. I also listened to the audible book instead of reading it and that was fantastic. I loved listening to the story being read. I am also very intrigued by Kai and London, the next story.

Loved listening to Deck and Georgie's story! I had read the book but hearing it was great! Love Georgie and her smart ass!