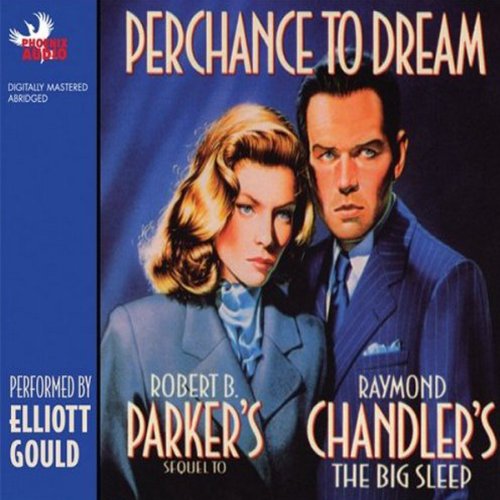 By: Robert B. Parker
Narrated by: Elliott Gould
Try for £0.00

The Sternwood family, immortalized in Raymond Chandler's The Big Sleep, is in trouble again. Lovely Vivian's psychotic sister, Carmen, has disappeared from the sanitarium, and Vivian herself has once again fallen into the clutches of the shady underworld character Eddie Mars.

Enter Philip Marlowe, the original tough-but-tender private eye, resurrected by Robert B. Parker, creator of his own phenomenally popular Spenser mystery series. He saved the Sternwoods once before. The question is: Can he do it again?

"Parker's effort goes beyond pastiche: he uses flashbacks from The Big Sleep daringly and seamlessly, and his terse style (a cop asks for the time of death: 'Any idea when yet?') is flawlessly in Chandler's footsteps. This is dazzling." ( Publishers Weekly)

What listeners say about Perchance to Dream

I really enjoyed this as a follow on from The Big Sleep, but the narration is above the worst I've ever heard, only slightly better than an AI news clip on YouTube. Please re-record with someone, anyone, who can read and speak at the same time!

loved it. prefer ray porter narration but yeah. book should have been added onto the end of the big sleep.

While this was only an average sequel, the major issue I've got with this book is the fact that I brought this thinking it was unabridged as advertised but turns out it is abridged.

THE MAN WHO TURNED THE HARD BOILED PRIVATE EYE INTO A SENSITIVE MAN OF THE MODREN AGE, STEPS BACK A FEW DECADES AND CHANNELS THE KING OF ALL PRIVATE EYE FICTION, NONE OTHER THAN RAYMOND CHANDLER HIMSELF. AND DOES A DAMN FINE JOB OF IT TOO. THIS IS CLASSIC STUFF FULL OF TOUGH GUY TALK AND ATMOSPHERE, BROUGHT TO LIFE BY ELLIOT GOULD'S DEAD PAN PERFORMANCE AS THE ARCHETYPICAL MARLOW. THE SEEDY UNDERBELLY OF L.A. NEVER SOUNDED SO GOOD AS THIS FAST GEM BY ONE (OR IS THAT TWO) OF THE ICONS OF THE GENRE.

An Under Appreciated Sequel to "the Big Sleep"

What did you love best about Perchance to Dream?

The writing AND narration equally.

The author, Robert B. Parker, brings Chandler's Philip Marlowe back to life in this sequel to the classic author's first novel.

What does Elliott Gould bring to the story that you wouldn’t experience if you just read the book?

Having played Philip Marlowe in the film "The Long Goodbye" - Gould is comfortable being the narrative voice of this character. In addition to that Mr. Gould is comfortable with silence and pauses and thus presents the story, and voices with good rhythm. Finally, his characterization voices of other men and women are not over the top while still keeping it listenable for the hearer of the audiobook.

The Sequel to the Big Sleep Continues the Excitement

As of 5/22/2013, upon my reporting of this error...the audiobook is falsely advertised as "Unabridged." Clocking in under three hours made me suspicious as did the fast clip of the story. I pulled off my old paperback version and began following along and discovered chunks of the story details and dialogue removed...thus the book is "Abridged." I do not like abridged books, but since there was not another option for this (I don't believe anyone ever recorded an unabridged version) I was happy to listen to it. But for those who want that, beware, this book falsely advertises itself as "Un." This is the reason I took it down one star for my "overall" review.