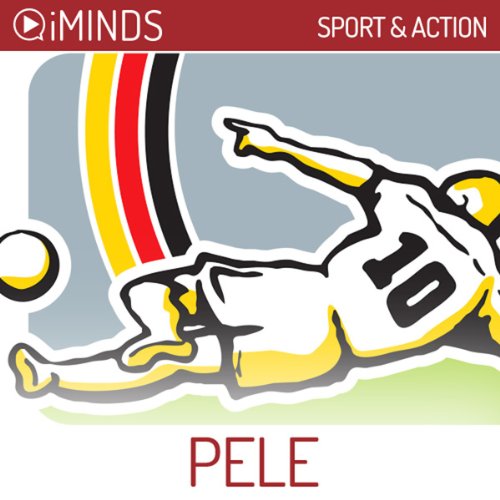 iMinds presents a quick and informative synopsis of the career of famed Brazilian footballer Edson Arantes de Nascimento, known to all by his nickname Pele. Backed by a jaunty, Latin-tinged soundtrack, Luca James Lee reels off the highlights of Pele's 20-year soccer career with a snappy, distinguished verve. Lee's harmonious voice is delightful as he informs the listener of Pele's recognition as a young prodigy to his role in leading Brazil to three World Cup titles. Pele: Sport and Action is an excellent primer on the man the International Olympic Committee named the Athlete of the Century.

Learn about Pelé with iMinds insightful audio knowledge series. Edson Arantes do Nascimento is one of the most successful sports players in history. You probably know this Brazilian soccer player by his nickname - Pelé. Pelé played soccer professionally for 20 years between 1957 and 1977. In this time he went from being a young sporting prodigy to the most admired and distinguished soccer player in history. Pelé referred to his beloved sport as “the beautiful game” and he is one of soccer history’s star players. In his accomplished career, he displayed such skill and talent that he won awards spanning all sporting fields. In 1999, the International Olympic Committee named Pelé the “Athlete of the Century”.

Pelé was born into a poor family on 23rd October 1940. His birthplace was the city of Tres Coracoes, Brazil. Growing up, he learnt soccer from his father. Fuelling an early passion, Pelé played for a local minor-league club in his adolescence. At the tender age of 13, Pelé was invited to play for a team managed by former Brazilian international Waldemar de Brito. Showing his talent, Pelé joined Santos soccer club’s junior team when he was 15. One season here was all he needed to prove he was skilled enough to join the senior team.

What listeners say about Pele