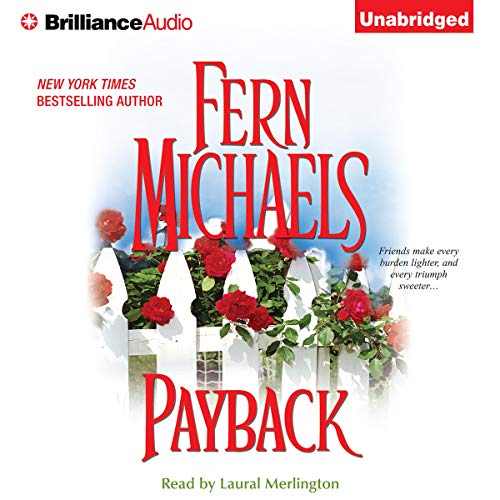 Meet the Sisterhood - seven very different women who found one another in their darkest days and formed an indelible friendship, strong enough to heal their pasts and bring laughter and joy back into their lives. In Myra Rutledge's beautiful Virginia home, amid hugs and fresh iced tea, shrimp fritters and shell-pink tulips, the friends have gathered to embark on their second mission of sweet revenge for one of their own. Julia Webster's husband, a U.S. Senator, has used his wife's graciousness and elegance to advance his career even as he's abused her trust at every turn and left her dreams for the future in tatters. Now, on the eve of his greatest political victory, he's about to learn a serious lesson in payback. Because the senator crossed the wrong woman...and there are six more where she came from...

What listeners say about Payback

While just as entertaining as the first book in the series, the 'payback' in this one is not as undoubtedly justified as the one performed in Weekend Warriors, and that distanced me a little from the story this time. Still well worth a listen though, and I do not regret using my monthly credit on this.

This series has a lot of potential but the execution is so sloppy it made me laugh out loud, especially some of the dialogue. Oh, and the dog is now a German Shepherd instead of a Belgian Malinois. Since she didn't describe him at all in the first book, I thought a malinois was a mastiff-type animal. Google showed me it's a similar type of dog to a shepherd, so I suppose it makes sense to assign him the more recognizable breed. However, this is typical of the writing issues in the books. I can only surmise the author was under a very tight deadline with competing priorities and just needed to get something on the page. The hardest thing to swallow is Nicole's relationship with Jack. If she's still pining for him that much after how he's treated her, she deserves him. The fact that the reader makes him sound like a melodramatic, foul-mouthed Bugs Bunny makes it even funnier. My mom had read some of the later books so we downloaded the first two for a car trip. She says they get better.

loved it. gripping book. great performance by the narrator. suspense is wonderful. read it again.

I really enjoyed the cast of characters, their brains and beauty and spunk. Well paced and fun listening to a good narrator. Helped make the time knitting samples go by quickly.
Am downloading #3 right now.

As with all of the Sisterhood Series this was a totally enjoyable listen. Laurel Merlington does a superb job with the audio and I love the story line.

Book 2 in the series and I am hooked. I think it would make a great television series... Hello, Netflix??!! Anyway, I listened to the first two for my book club and now I want to listen to or read more!

good book thank you. very suspenseful and exciting. reader was great love the series. thank you.

I love the series, it keeps me captivated, makes me laugh and cry. I feel like I'm part of the sisterhood!

a must listen great sisterhood story, loved it.

loved the revenge by the great sisterhood. I love the whole series. narareted beautifully. loved it.

The sisters always keep you glued to the story.

The sisters always keep you glued to the story. Fern Michael's has never written a story that is under a 10, believe me, I have read most of them.

i love the Sisterhood!

i love the Sisterhood. and listening while i work! The voices of characters are decent too!