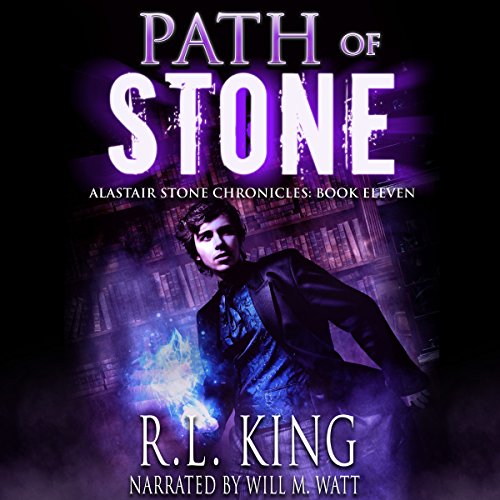 After 15-year-old Alastair Stone is caught performing magic at his prestigious boarding school, he can hardly believe his good fortune; not only isn't he punished, but his father arranges a trial apprenticeship - three years early - with one of the most powerful mages in all of Britain. He'll have a month to prove himself, or he'll be packed back off to school.

But when Alastair arrives at his new master's vast, remote country house, he soon finds that his teacher's draconian style and exacting standards aren't the only challenges he'll have to face to pass his trial. The house holds deadly secrets, and not all of his master's staff are on his side.

There's also the matter of the village girl he can't stop thinking about. All this is bad enough - but when events spiral out of control, unleashing a murderous enemy to stalk the dark halls of the manor, Alastair is left as the only line of defense against a potential bloodbath. Can a barely-trained, 15-year-old mage on his own use his wits and courage to save not only his life, but his master's?

What listeners say about Path of Stone

Definitely a favorites in this series!

I was a little unsure of going back in time to a teenage Stone (cuz I really like the adult version). However, this was a great book and a fun, fast paced read with a great narrater too! Definitely a favorite in the series!

Path of Stone is a step back in time where we get to see our hero as he was at 15, officially learning magic for the first time. We get to delve deeper into what made him the man (and mage) he is. All I can say is the story is bloody brilliant! If you are coming into the Chronicles for the first time - You'll learn a lot more about our hero, but keep in mind that most of the stories take place while he's in his 30's.

This story adds depth and gives us a better understanding of Alastair's world.

I don't get to read much, and without audiobooks - I'd get a lot less reading done. I've been listening to the Alastair Stone Chronicles for quite some time and I love Will M Watt's narration. Most of the story is a look back to Alastair's Apprenitcehood as such, rather than read the story with an 'American Narration' we get to hear Will's actual accent as he narrates the story - this is the icing on the cake!

I finished it through the night. Very well written. As always Will M Watt did a good job in the narration and performance. I so love this series and I hope that R L King will continue with more books. Alastair Stone is an excellent character and this latest book telling how he started his apprenticeship is beautiful. Worth a credit.

I love this series! To those already familiar with Alastair Stone, this installment provides more insight into his past - specifically, the start of his apprenticeship as a mage. For new readers, this is a great introduction into Alastair's world, and can act either as a stand-alone story, or as an introduction to the rest of the series.

R.L. King writes characters with depth, complexity, and plenty of flaws as well as strengths. No superheros here, but I like it that way. She has created a universe and a magic system that I find very believable. Her storytelling skills make me want to keep listening until the very end - and then I can't wait for the next book to be released!

Will Watt did a fantastic job of narrating this book. I especially liked the decision to have Will Watt narrate the majority of the book in his British accent. It really helped to solidify the story's main setting in England.

I would recommend this book and the series to anyone who likes the urban fantasy / supernatural suspense genre. This book in particular might appeal to a younger audience, if only because of Alastair's age in this story, not because the writing is in any way less geared towards adults.