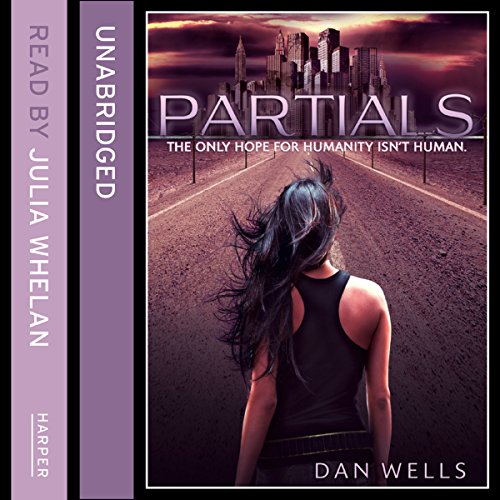 The only hope for humanity isn't human.

In a world where people have been all but wiped out by a virus created by part-human cyborgs called Partials, and where no baby survives longer than three days, a teenage girl makes it her mission to find a cure and save her best friend's unborn child. But finding a cure means capturing a Partial....

"A thrilling sci-fi adrenaline rush, with one of the most compelling and frightening visions of Earth's future I've seen yet. I couldn't put it down." (Pittacus Lore, New York Times best-selling author of I Am Number Four)
"Mr. Wells has recombined familiar dystopian elements, added original ones and thrown in dashes of dry wit to create a sprawling, action-packed medical thriller full of big ideas and exciting reversal." ( The Wall Street Journal)
"Kira is a bold heroine with lofty goals, and readers will willingly follow her to the sequel, where things are sure to tilt again." ( ALA Booklist)

What listeners say about Partials

Great series a must read/listen

I really enjoyed this book. It starts in a dystopian future where most of the human population is dead because of a disease that was let out by the partials which were made by humans to defeat a war, they look and act like humans.
The human race that is left over have come together in NY and are trying to find the cure for the disease. Most of the woman are constantly pregnant because they are trying to carry on the human race, but their babies die instantly from the disease.
Kira is the main character she is a doctor and is trying to find the cure however she goes one step further and because of this step things start to get very interesting.
It is a great read, its got action, it is funny, its smart, thrilling and it gets you thinking about what you would do in certain situations.
Kira is a great main character she has her faults which makes her human i don't like it when the lead is perfect.
Theres lots of surprises and it makes you want to get the next book as soon as you finish this one!

A Fantastic YA Series!

This is the first book in the Partials Sequence series. I loved it!

Kira is a sixteen year old girl living in a post apocalyptic Long Island, along with the few remaining humans after a biochemical war. I liked this character a lot. She has a lot of compassion, bravery and determination. However, she finds out a secret that will change her life forever.

I was recommended this book by Amazon, since I am a fan of dystopian YA. I decided to give this book a try, and downloaded an audio book copy to listen to whilst doing chores. I loved the story so much, I also purchased a Kindle copy to read.

Narrated by Julia Whelan, the story is a fantastic post-apocalyptic dystopian novel full of twists and turns. Kira is a girl facing an insurmountable challenge (capturing a Partial and trying to find the cure for RM). However, she has a host of friends that go with her on her journey. The story is told through Kira's eyes, and the reader goes through the ups and downs of being a teenager - the angst and the frustration of being old enough to work and have children, but not exactly treated as an adult either. The characters were quite interesting, but Samm was an enigma. Yes, he's a Partial, but I was dying to know what he thought of things. It would have been nice to have some of the latter part of the story from his point of view. However, that wasn't to be. There is political intrigue that threatens the populace, not to mention the RM disease. There is also hint of attraction between Kira and Samm that smoldered in the background and, even though Kira already has a boyfriend, I was secretly hoping that they would get together.
The narrator did a wonderful job in bringing the characters alive, but I was a little disappointed that she made Kira sound a bit whiny. Yes, teenagers and angst go hand in hand, but when I read the story rather than listened to it, the voice in my head didn't sound the same. I suppose it's the interpretation we, as readers, make when reading books that brings the book to life in the mind's eye. I am now wanting to read/listen to the next book in the series, Fragments and the final installment, Ruins, which has not been released yet.

Dan Wells has written a fast paced, action packed post-apocalyptic YA novel that kept me riveted from the first page. I loved his writing style, which kept me highly entertained and the story flowed wonderfully.

I highly recommend this book if you love books like The Hunger Games and Divergent or YA, Science Fiction, Dystopian or Post-Apocalyptic genres. - Lynn Worton

Put off listening for a while as wasnt sure. Glad I gave it a go

good read aimed at young readers. a few plot holes, nothing glaring. struggled to continue 1/4 of the way through. glad I finished.

How can life go on

Looking at life after an apocalyptic event. How far are you willing to go to continue humanity and what would you do if you found out you may not be who you think you are. All these aspects are explored by a group of 16 year olds who decide to challenge authority.