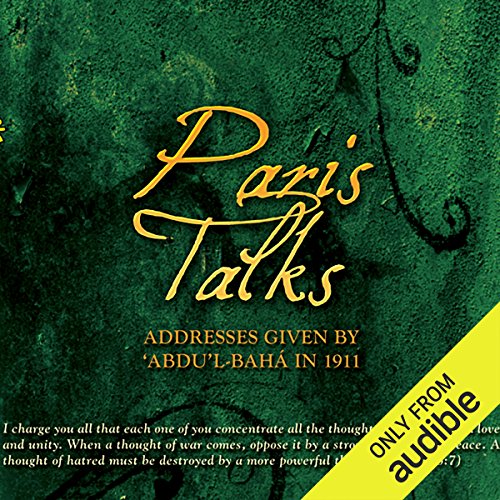 Addresses Given by `Abdu'l-Bahá in 1911
By: Abdul-Baha
Narrated by: Brian W. Roberts
Length: 5 hrs and 2 mins
Categories: Health & Personal Development, General
5 out of 5 stars 4.8 (4 ratings)

This collection of inspiring and uplifting talks documents an extraordinary series of public addresses ‘Abdu’l-Bahá gave on his historic trip to the West in the early 20th century. Despite advanced age and poor health, he set out from Palestine in 1911 on a momentous journey to Europe and North America to share the teachings and vision of the Bahá’í Faith with the people of the West.

Addressing such subjects as the nature of humankind, the soul, the Prophets of God, the establishment of world peace, the abolition of all forms of prejudice, the equality of women and men, the harmony of science and religion, the causes of war, and many other subjects, ‘Abdu’l-Bahá spoke in a profound yet simple manner that transcended social and cultural barriers. His deep spiritual wisdom remains as timely and soul-stirring as it was nearly a century ago.

‘Abdu'l-Bahá, meaning “Servant of the Glory,” is the title assumed by ‘Abbás Effendi (1844–1921)—the eldest son and appointed successor of Bahá’u’lláh, the Prophet and Founder of the Bahá’í Faith. A prisoner since the age of nine, ‘Abdu’l-Bahá shared a lifetime of imprisonment and exile with his father at the hands of the Ottoman Empire. He spent his entire life in tireless service to, and promotion of, Bahá’u’lláh’s cause and is considered by Bahá’ís to be the perfect exemplar of the Faith’s teachings.

This was very enlightening.

Thank you for doing this audio book. I hope to see more Bahai audio books.

Who am I to review the work of the great exampler!

Would you listen to Paris Talks again? Why?

Yes, cause it is full of valuable insights for the ills of mankind today and how to treat them

What other book might you compare Paris Talks to and why?

Some Answered Questions by AbdulBaha

this was a wonderful book. I listened to it 3 times and an still learning from it.

For someone new to the faith this book is absolutely perfect. The audio was done very well and I felt very drawn to everything that was said. Very confirming.

Definitely; since it benefited my life, I have a responsibility to share it with others.

The author does not advise you, instead, He tries to make you ponder, reflect and think about an important subject.

Which character – as performed by Brian W. Roberts – was your favorite?

I didn't try to pick a particular one.

11 vital principles which are required for today's life.

This is for sure a great source of inspiration and a new vision to the requirements of these days.
Best Wishes 4 U شاد باشين

Paris Talks of Abdul'Baha is beyond such ratings and one who has learned about Abdul'Baha knows this well. Thank you for producing this audible file.

Something everyone should read!

Loved it! Abdu'l-Baha elucidates concepts in religion for every faith in short concise talks. It is truly an eye opening experience.

Gives knowledge of purpose of our creation and how we should act as spiritual being. how virtues are so very important in progress of our individual as well as progress of our society.

The principles and ideas in this book are what the world sorely needs for peace and harmony. I loved listening as it always changed my energy and uplifted my spirit to focus on the grand vision enshrined in Baha’u’llah’s teachings.

The audiobook narrator has a wonderful voice and did an excellent job with two exceptions. I cringed each time he pronounced “Baha’u’llah” and “illumined.” Perhaps he was improperly coached, but it is so disappointing to hear the name of the Founder of one’s religion pronounced so awkwardly. If he was going for a Middle Eastern pronunciation, he should have just stuck with the way American Baha’is pronounce the name because he is an American narrator.

Otherwise, I was so happy to finally “read” this wonderful book.