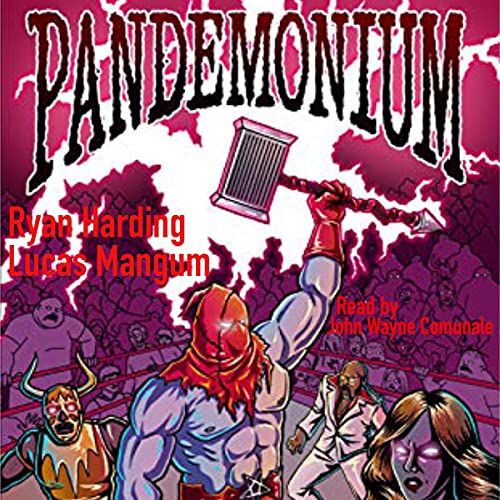 From Ryan Harding (author of Genital Grinder) and Lucas Mangum (author of Saint Sadist) comes quite possibly the bloodiest novel ever written: Pandemonium.

A stranger in a mask walks through Philadelphia, handing out tickets to an underground wrestling show, promising a level of violence unlike anything fans have seen before. The card features a mix of legends and hot up-and-comers. Most intriguing, it will mark the debut of the enigmatic, hammer-wielding Crimson Executioner, a monster of a man whose promo videos look like something out of Saw or Hostel.

The crowd enters past masked guards who don’t speak. Even the talent doesn’t know who funded the show or why; they’re happy just so long as the checks clear. None of them know the diabolical plot behind it all. When the Executioner murders his opponent in the ring, it soon becomes clear the show is a ritual to open the gates of hell and unleash pandemonium.

Demons rise throughout the venue, using the bodies of the dead as vessels to wreak all manner of brutal carnage. Audience members and performers alike must now fight for survival as the contagion spreads all around them, inside the arena and out into the city.

In the tradition of Dario Argento’s Demons franchise and set in the world of hardcore wrestling, Pandemonium is a hyper-violent tale of demonic possession, ancient evil gods, and bleeding the hard way.

What listeners say about Pandemonium