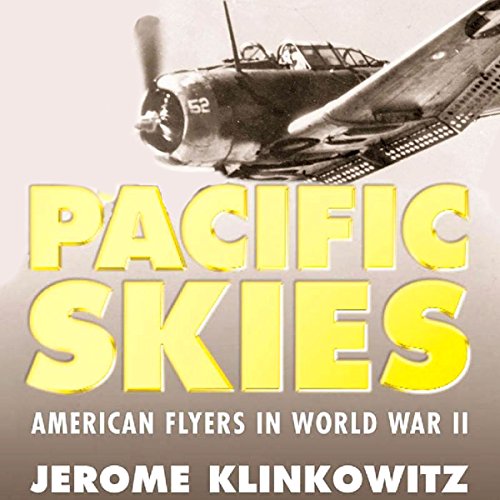 From 1941 to 1945 the skies over the Pacific Ocean afforded the broadest arena for battle and the fiercest action of air combat during World War II. It was in the air above the Pacific that America's involvement in the war began. It was in these skies that air power launched from carriers became a new form of engagement and where the war ultimately ended with kamikaze attacks and with atomic bombs dropped over Japan.

Throughout the conflict American flyers felt a compelling call to supplement the official news and military reports. In vivid accounts written soon after combat and in reflective memoirs recorded in the years after peace came, both pilots and crew members detailed their stories of the action that occurred in the embattled skies. Their first-person testimonies describe a style of warfare invented at the moment of need and at a time when the outcome was anything but certain.

Gathering more than a hundred personal narratives from Americans and from Japanese, Pacific Skies recounts a history of air combat in the Pacific theater. Together their stories express fierce individualism and resourcefulness and convey the vast panorama of war that included the skies over Pearl Harbor, Wake, and Guadalcanal and missions from Saipan and Tinian.

As Pacific Skies recounts the perilous lives of pilots in their own words, Jerome Klinkowitz weaves the individual stories into a gripping historical narrative that exposes the shades of truth and fiction that can become blurred over time. A book about experiencing and remembering, Pacific Skies also is a story of unique perspectives on the war.

Jerome Klinkowitz, a professor of English at the University of Northern Iowa, is the author of forty books, including such World War II titles as Their Finest Hours, Yanks over Europe, and With Tigers over China.

The book is published by the University Press of Mississippi.

What listeners say about Pacific Skies

It's a shortened version of the air war in the Pacific, but is particularly useful in giving specific references

This is not a very good listening experience. There is no real context, just a few personal recollections. Waste of a credit/