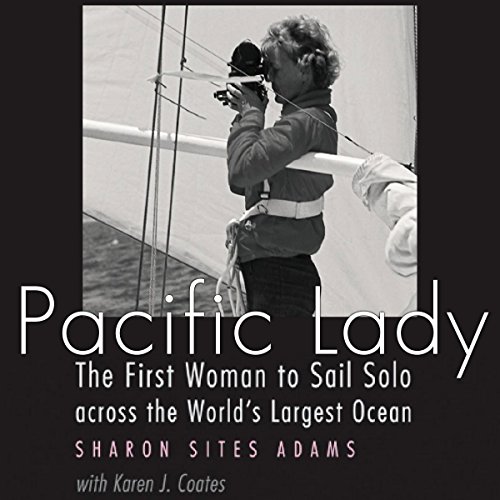 Pacific Lady: The First Woman to Sail Solo Across the World's Largest Ocean

It was an age without GPS and the Internet, without high-tech monitoring and instantaneous reporting. And it was a time when women simply didn't do such things. None of this deterred Sharon Sites Adams. In June 1965, Adams made history as the first woman to sail solo from the mainland United States to Hawaii. Four years later, just as Neil Armstrong very publicly stepped onto the moon, the diminutive Adams, alone and unobserved, finally sighted Point Arguello, California, after 74 days sailing a 31-foot ketch from Japan, across the violent and unpredictable Pacific. She was the first woman to do so, setting another world record.

Inspiring and exciting, Adams's memoir recounts the personal path leading to her historic achievements: a tomboy childhood in the Oregon high desert, an early marriage and painful divorce, and a second marriage that ended when her husband died of cancer. In the wake of his death and almost by accident, Adams discovered sailing. Six weeks after her first sailing lesson, she bought a boat, and within eight months, she set out to achieve her first world record. Pacific Lady recounts the inward journey that paralleled her sailing feats, as Adams drew on every scrap of courage and navigational skill she could muster to overcome the seasickness, exhaustion, and loneliness that marked her harrowing crossings.

"Adams' inspirational tale is a groundbreaking journey worth taking." ( Booklist)
"A truly inspiring story for anyone dreaming of taking on a challenge!" ( The Feast)
"This record of Adams' extraordinary and understated adventures adds to the history of women's single-handed sailing." ( Sports in History)

What listeners say about Pacific Lady: The First Woman to Sail Solo Across the World's Largest Ocean

Woman and the Sea

Where does Pacific Lady: The First Woman to Sail Solo Across the World's Largest Ocean rank among all the audiobooks you’ve listened to so far?

I loved, loved, LOVED this audiobook! First, I will confess that I have always been fascinated and drawn to stories involving the ocean-probably from my experiences along the New Jersey shore each summer as a kid. Nevertheless, I was completely swept up by Pacific Lady's accounts at sea, and I often felt anxious waiting to hear what would happen next. This was an incredible story, and you can't help but appreciate and admire such an amazing person! Also, I found the unique cadence of the narrator's voice to be appealing, effortlessly transporting me upon a boat in the Pacific with our heroine.

One of the best books I have ever read!

A true story, a love story, of sailing told in a refreshingly straightforward manner.

Interesting biography of lady who started sailing as a hobby and then took it farther. Well written for the sailing enthusiast, as there are many technical terms., as well as the story of solo to Hawaii and then solo from Japan back to LA.

The kind of book you do not want to end. Or you want to stop while reading it and ask the author questions. I enjoyed all of it and recommend it. "I was provided this audiobook at no charge by the author, publisher and/or narrator in exchange for an unbiased review via Audiobook Blast."

it's a very "matter of fact" story about the first woman to cross the Pacific Ocean. She emphasizes the things that she felt she needed to do to maintain her femininity while accomplishing what she was driven to as a sailor. great story!

An easy fun listen from the perspective of a determined individual. Pick this one up and give it a listen.

The Pacific Lady is a spunky lady.

I received this free Audible book in exchange for an unbiased review.

I found this audio book to be somewhat interesting but not entirely engaging. The lifestyle that Sharon felt compelled to live, especially in this era, was truly pioneering and brave. Yet, she seemed to approach and complete her self-made challenges quite simply and humbly. No doubt, she would be the kind of person that you would just enjoy being around.
Some stretches of the book were a little dull for my taste; and I was slightly disinterested by the presentation of the narrator. However, if you have any interest in sailing or courageous women, I believe you will be very entertained.