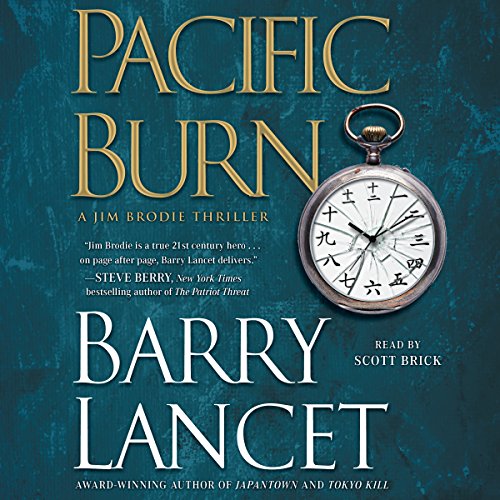 In the third book in "what will likely be a long and successful series" (San Francisco Magazine), Japanese antiques dealer and PI Jim Brodie goes up against the CIA, the FBI, the Department of Homeland Security - and a killer operating on both sides of the Pacific.

In recognition of his role in solving the Japantown murders in San Francisco, antiques dealer and sometime-PI Jim Brodie has just been brought on as the liaison for the mayor's new Pacific Rim Friendship Program. Brodie in turn recruits his friend, the renowned Japanese artist Ken Nobuki, and, after a promising meeting with city officials and a picture-perfect photo op, Brodie and Nobuki leave city hall for a waiting limo.

But as soon as they exit the building, a sniper attacks them from the roof of the Asian Art Museum. Quick thinking allows Brodie to escape, but Nobuki ends up hospitalized and in a coma. Brodie soon realizes that with the suspicious and untimely death of Nobuki's oldest son a week earlier in Napa Valley, someone may be targeting his friend's family - and killing them off one by one.

Suspects are nearly too numerous to name - and could be in the United States or anywhere along the Pacific Rim. The quest for answers takes Brodie from his beloved San Francisco to Washington, DC, in a confrontation with the DHS, the CIA, and the FBI; then on to Tokyo, Kyoto, and beyond, in search of what his Japanese sources tell him is a legendary killer in both senses of the word - said to be more rumor than real but deadlier than anything else they've ever encountered if the whispers are true.

" Pacific Burn is a page-turning, globe-spanning tale of murder, suspense, and intrigue that grabs and holds your attention from beginning to end. Barry Lancet is truly a gifted author, and his character of Jim Brodie is unlike any private investigator you've ever encountered in literature." (Nelson DeMille, New York Times best-selling author of Radiant Angel)

Would you consider the audio edition of Pacific Burn to be better than the print version?

I did not read the print version. However, I did read the past two novels in print and I can say Scott Brick easily handles the Asian names, phrases and conversations with ease.

Barry Lancet is a master at throwing in plot twists and character actions which keep you turning pages (or in this case finding reasons to take the long way home to continue to listen to the audible version) not wanting to miss what is coming next.

Which character – as performed by Scott Brick – was your favorite?

Jim Brodie spans two continents and two very different cultures. I love learning about both the Japanese culture and the art world through his eyes. From here on out, when I read a Jim Brodie thriller, I will be hearing Scott Brick's voice. Brick also did a great job with the voice of the Steamwalker.

Without a doubt. The action and twists kept coming at a furious pace. I kept find ways to take the long way home to continue to listen to Pacific Burn.

If you have not read the previous two books, Japantown and Tokyo Kill I recommend you do so. Jim Brodie has become one of my must read heroes, along with Jack Reacher, Lucas Davenport and Harry Bosch.

I rarely review a book, but I am hooked on this series! You will not be disappointed but do start with his first, "Japantown", and you will be hooked as well.

If you are familiar with the series, this book will take you deeper into the character and into the mysterious underground of Japan. I don't want to give anything away but the plot is laid out for you in the book descriptions available online.

What a great read and a fantastic immersion into this authors world of words!

too many international location, too many characters, too many bad guys, main character too super human

Would you recommend Pacific Burn to your friends? Why or why not?

What aspect of Scott Brick’s performance would you have changed?

When I started this book Imeant to count all the martial arts blows.. but I fdid lose count as the blows sprinkled the landscale. This has nothing new to offer thecserious reader but for fans of fast paced rock 'em, sock 'ems - get out the popcorn.

Would you try another book from Barry Lancet and/or Scott Brick?

Scott Brick is one of my favorite talents, but this was my first Barry Lancet books. I must say that one of the measures of how much I enjoy a book is how much it keeps my attention. I found my mind wandering and a decided lack of interest in what happened next. I cant always put my finger on why that is, as in this case. I did find the main character just not believable. A bit one dimensional with no grittiness. Some of the other characters might have been more interesting but they played a small role in the story as a whole. The story seemed a bit disjointed and in the end the antagonist was neither a surprise nor believable.

Pacific Burn is Book 3 in the Jim Brodie series. Brodie is a San Francisco-based dealer in Japanese antiques as well as head of Brodie International which is a global private investigations firm headquartered in Japan. He was raised in Japan and the US and is fluent in Japanese and English and an expert in Japanese martial arts. Brodie is a widower with a preteen daughter. In this book Brodie searches for a killer as he is sometimes helped and sometimes frustrated by US and Japanese government security agencies and police forces. The action moves between San Francisco, Tokyo, and Washington DC.

I have previously reviewed here at Audible Tokyo Kill which is Book 2 in the Jim Brodie series. Barry Lancet is a great author of mystery and suspense thriller novels. The quality of his books justifies a much larger audience than he has attracted so far. The Jim Brodie series is genuinely creative and uniquely different. Scott Brick's narration is rock solid.

I highly recommend this novel and this thriller series.

The Story was wonderful! Scott Brick you’re the man! Your narration come to life. This story and narration takes you to Japan and to the states! Great book to read and listen to!

Liked it a lot!

Well worth the price of admission. Mr. Brick does a great job of bringing the story to life. My second book in the series and I’m for sure going to listen to the others

Great wrting, good character development. I listen to books since it allows me to be entertained and engrossed while doing other things. Scott Brick is a terrific narrator. Brings the story to life. I love unexpected twists and turns and Pacific Burn supplied some really good ones . To be truthful i think reading the book might bore me but listening to Scott Brick tell the story makes the author's work even better.

Never made sense of it

It's a pretentious book for a thriller. Very violent at times. Not much of a mystery but that is better than vast conspiracy endings.