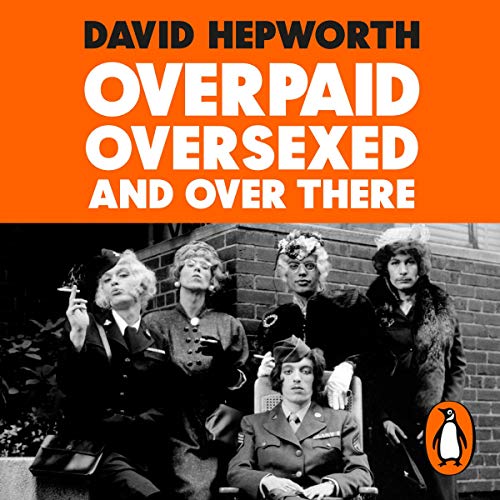 Overpaid, Oversexed and Over There

The Beatles landing in New York in February 1964 was the opening shot in a cultural revolution nobody predicted. Suddenly the youth of the richest, most powerful nation on earth was trying to emulate the music, manners and the modes of a rainy island that had recently fallen on hard times.

The resulting fusion of American can-do and British f--k-you didn't just lead to rock and roll's most resonant music. It ushered in a golden era when a generation of kids born in ration-card Britain, who had grown up with their nose pressed against the window of America's plenty, were invited to wallow in their big neighbour's largesse.

It deals with a time when everything that was being done - from the Beatles playing Shea Stadium to the Rolling Stones at Altamont, from the Who performing their rock opera at the Metropolitan Opera House to David Bowie touching down in the USA for the first time with a couple of gowns in his luggage - was being done for the very first time.

Rock and roll would never be quite so exciting again.

What listeners say about Overpaid, Oversexed and Over There

Hepworth does it again.

You always know that David Hepworth will deliver a entertaining informative listen while managing to find a new angle on a supposedly well know subject. Next one please and soon

Another brilliant book from David Hepworth, charting the British invasion of American popular music, from the 60s, into the 70s and again in the 80s with synth pop. All told in his characteristically droll way, it's a joy from start to finish.

Entertaining but too much on the Beatles

I enjoy listening to the Word Podcast, so was looking forward to this book. David Hepworth writes well, combining stories about the artists with analysis of cultural and social trends. I did think that this was a bit overdone at times. I don't think the musicians he described in the book thought they were part of any great social movement. Most of them just wanted to play music and thought they had a limited time in the business. While I realise the importance of the Beatles in showing that a British band could be big in America, many of the Beatles stories have been heard before. I was more interested in the bands that followed the Beatles, and wished that there was greater emphasis in the book on those. I learnt a lot from the chapters on the Hollies, Hermans Hermits and the Animals, and wished there were more stories about 60s bands. I also thought that he rather skipped over the Police, who were massive in America in the 80s and even played at Shea Stadium. Overall, it could have been shorter but was still an entertaining and informative listen.

Well researched, shame about the delivery

I bought this download as I am very interested in the subject matter and I have been a fan of a number of the bands mentioned within the narrative. Hepworths strength is clearly his research but his delivery has too much snide and his really voice grates after a while.
A lot of the "war stories" included here have been told before, and by better journalists.
This "audible" download has put me off of buying any more of Hepworths titles, as I fear his style of delivery would be very similar, and become more and more annoying with each Chapter.
It feels as if his general storyline observations regarding the ongoing development of Youth Culture have been shaped to fit his own agenda and too little time is spent on the comparative U.S. artistes output over the same period. Which would have made for a more interesting listen.

This is a comprehensive history of British Pop music and its impact on the US public.
Very well written and narrated.
Insightful and interesting.

Billy Corgan of Smashing Pumpkins once said "The Beatles and Led Zeppelin have been overexplained" There might be some truth in that but fans of both will undoubtedly enjoy David Hepworth's uniquely compelling take on these anecdotes.

Fans of BBC's Whistle Test will welcome hearing his voice and as a fan of his writing too - and rock books/ journalism in general - there is some familiarity with some of the content so it is the lesser known nuggets of the stateside travails of The Dave Clarke Five and The Police which are the real gems here.

Thoroughly enjoyed this and will be listening to the albums listed at the end that I don’t know already.

I purchased this after enjoying '1971'; which I've subsequently played again after I got through 'Overpaid, Oversexed...'.

Again, it's a thoroughly enjoyable canter through music's 'Golden Age' with the usual Hepworth enthusiasm for the subject. As always, it's as much about the social history of the time as the bands that heavily influenced the period, which focuses very much on the '64-77' period. The early 80s MTV inspired era is given less comment.

In summary, DH is great and knowledgable company, especially for winter/lockdown walks and I'm moving straight on to 'A Fabulous Creation'.

As usual, David's new book is beautifully paced, funny and occasionally incisive. While he may not tell you any information you haven't heard before (probably from him!), his books are always well reasoned and well researched - he is fabulously well read on his chosen subject. Just as you are beginning to drift along on a haze of nostalgia, he'll make you sit up and take notice with a perceptive piece of reasoning or a brilliant one liner.

As generally happens with David's books, he builds to a central thesis in the last half hour. Here, he focuses in on why British bands were so successful in the USA from the early 60s to the early 80s - and why they aren't now.

It's all brilliantly entertaining and - as always - wonderfully read by the author.