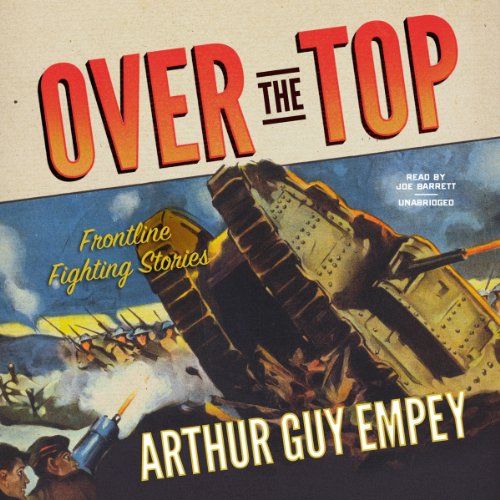 In 1915, the British ocean liner Lusitania was making its way from New York to Liverpool when it was sunk by a German U-boat, shocking the world with the massive death toll. Infuriated by the tragedy, Arthur Guy Empey, an American citizen, traveled to England to enlist in the Royal Fusiliers, as the United States had not yet entered the war. Over the Top tells the story of Empey’s experiences in a voice straight from the western front, causing listeners to feel as if they are right there in the trenches.

This book was the biggest best seller of the war, with sales totaling a million copies. Perhaps one of its most entertaining features is the appendix entitled "Tommy’s Dictionary of the Trenches", which defines slang and other terms used by British soldiers. The book remains a classic, the fascinating story of an American soldier fighting in the British Army.

“A snappy autobiographical account of the New Jersey boy’s adventures with the British Army in France.”—David M. Kennedy, in Over Here: The First World War and American Society

What listeners say about Over the Top

This book was written in 1917 and must be accepted and judged by the time in was written, taking into consideration the use of language of the time, the culture, societal norms and so on. Arthur Guy Empey was born in Ogden Utah in 1883 and he died in 1963 in Kansas. Apparently he was angered by the failure of America to act and enter the War so he went off to England to join up. He wrote the book when he returned to the U.S. after being wounded and discharged by the British Army. He wrote this when his experiences of the war were fresh in this mind and relevant to the Americans about ready to enter the war. He lays out what happened from the day he joined the British Army to his return home. He gives a day by day description of life in the trenches, the weaponry used; various British Military regiments, description of the uniform wore by the British soldier (Tommy, as he calls them) as well as the songs sung, poems written and the humor of the war. When he returned to civilian life his occupation is listed as a writer and actor. He apparently acted in some movies and plays of the day. He wrote other books but none was a popular as “Over the Top”. His daughter was a model and actress Marguerite Empey (aka Diane Webber). I have read a number of these firsthand accounts of the war and find them most enlightening and educational. Joe Barrett did a good job of narrating the book.

The definitive soldiers point of view during WWI

This is a must read for those wanting to know what the private experienced during WWI. Of course, having been written during the war itself, it is somewhat sanitized by the sensibilities of that era. You won't find the horrific descriptions that novels of the Vietnam War era have. That being said, knowing this, one can imagine the true difficulties and horrors being described.

Others have classified this story as a propaganda piece. I would argue otherwise. Obviously, the author has a very defined sense of right, wrong, and duty. I don't think the author's goal was to recruit others to the cause, but his intent was to simply tell his story, and this he does well. The only areas I would consider propaganda are in the small vignettes within the main story, but I get the feeling the author was just relating some of the stories he had heard in the trenches.

The real value in this story lies in the telling of the day to day life of the front line soldier. Details of assisting the cooks and scouring the pots with mud, how leave was announced and executed, the unit play, etc. These glimpses into life in the trenches are a goldmine.

A short work, it won't take up much of your time. This novel is a must read for anyone with relatives, now passed away, who fought in WWI, and for those even remotely interested in that period. Don't let the fact that the story is 100 years old dissuade you, as it' is a fresh and pertinent today as ever.