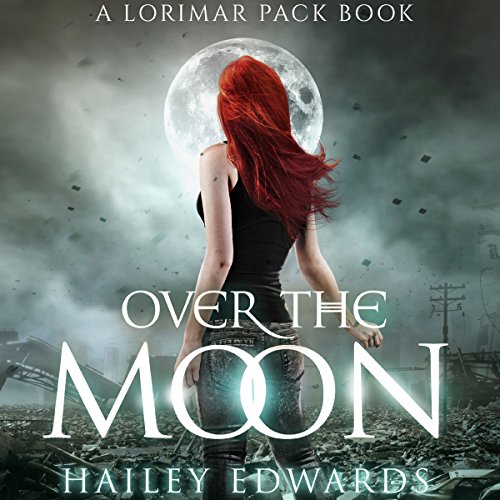 By: Hailey Edwards
Narrated by: Brittany Pressley
Try for £0.00

Dell has persuaded the Bloodless army to fight alongside her pack in Butler, but she still has to get there. Halfway home, the rift detonates, blasting out a magic surge that sweeps across the globe, frying electronics and spells alike. Leaving her with no way to get home except on her own two - or four - feet.

Dangerous times demand equally lethal alliances, and she has to make a risky deal if she wants to reach the front lines before it's too late. The bargain grants an ancient fae power over her, a hold she vowed no man would ever have on her again, but freedom requires sacrifice.

As the threshold between Earth and Faerie erodes, humans and supernaturals alike are in danger of being erased as the fae seek to claim this world as their own. This is the moment when new legends arise and old gods fall, when fates unspool and futures unravel, when battles are won and lives are lost.

What listeners say about Over the Moon

I listened to this entire 6 book series. Overall, it’s fine for what it is supposed to be (thus 4 stars). Yet, I must say by this sixth book, I’ve had it with the guilt, especially the it’s so dumb how could anyone (much less this supposedly very strong woman [or even the men at times]) feel guilty about that situation! Even some of what the author considered the character was “at fault” for was ridiculous. I might be generous with my ratings, but that’s because I don’t compare apples to oranges. I don’t rate great works of literature on the same scale as I do fun, YA or light reads. Brittany Presley did an okay job of narrating, just as the first narrator of the first 3. Yet, I know Dale was coming into her own in these 3, but either she was too sweet in the first 3 books or the sweet part of her character was almost impossible to find in the last three books. Caring, yes, sweet, no. I was pretty happy spending my time on this series, especially since it was included in my membership.

This story gets way better at about book 4. When it's about Dell the beta.

creative entertaining and fun! made me laugh out loud at the romance and sassyness of the main characters! loved the series. left me wanting more!

Love it. but how it ended threw me off. There are more more books yet left opened, unfinished. Why?

Over the Moon Bk 6

War isn't coming - it's already arrived, and Dell has built allies to fight alongside her and her pack as the fae seek to conquer the world and take over. There are reasons why humans aren't aware of the super naturals and another reason why the two worlds don't know about each other -

While I enjoyed this final story in this series I found some of the way the story validated itself at times were weak IMO. It worked, but some of the justifications didn't seem as valid to me....or maybe it was just me... Either way, it was still enjoyable escape.

Overall it won't be a series I will reread again we'll be ready again but but I enjoyed some of the books. I do like this author though and her other series' have really captured me and I couldn't put them down so I'm surprised. Then again this series was written a little earlier so I guess every author gets better the more they write. The books did end with a good ending for the characters and it wrapped it up very nicely which I like.

All the amazing different fea creatures they thought up were so cool to picture what it would really look like.

Great story, grabs you and even then never lets go. I love this series and will get them as I can.

Good read. Really home she continues the story. Continuing these stories in different perspectives is awesome.