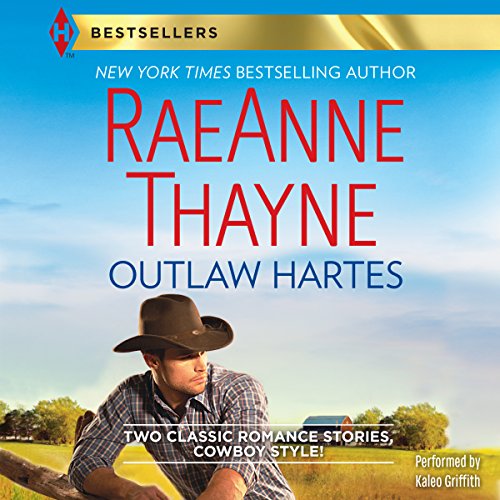 New York Times best-selling author RaeAnne Thayne brings us two stories from her Outlaw Hartes series. These couples may not be looking for love, but they are about to find it!

He had been bamboozled by women before, but for rancher and single father Matt Harte, this is the last straw! Because of his daughter's shenanigans, he's been roped into planning the annual Valentine's Day dance. And who's his partner on the committee? Beautiful big-city vet and recent Salt River transplant Ellie Webster, the woman he can't take his eyes off of - though not for lack of trying!

Cassidy Harte and the Comeback Kid

Ten years ago Cassidy Harte stood at the altar waiting for Zach Slater, but he never showed. So she did the only thing she could - held her head up high and swore off men. Now suddenly Zach's back with an "I'm sorry" on his lips, an explanation she refuses to hear, and the vow to make her his once again. And it seems this is one vow he's determined to keep....

What listeners say about Outlaw Hartes

I didn’t like main characters. The H was a jerk and the h was a doormat. She was easy and apologetic. Couldn’t connect with the main characters because. the H push the h many times and she kept coming back. His inner dialogue was contradicting and so was the h. I didn’t like the story and won’t recommend either.

Very enjoyable stories. I've never read this author before but I will definitely read more from her now. Like the second book in the series. For some reason this was book 1 and 3 of the series.

Awesome narration by Kaleo Griffith...which is the main reason I purchased this audio book.