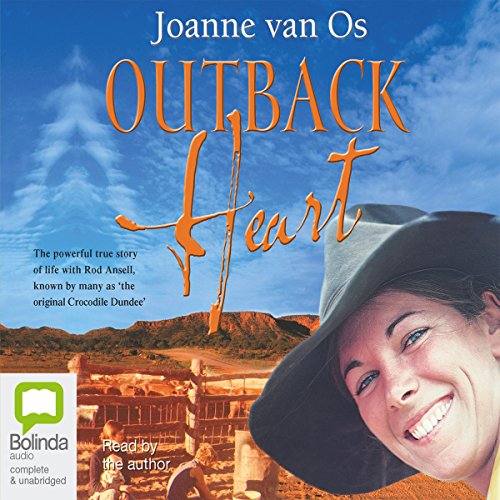 The story of Rod Ansell, the "real-life Crocodile Dundee", is one of adventure, romance, and tragedy. Here, Joanne van Os recalls her life with this mercurial man - more than a testosterone-fueled cattle wrangler, Rod was thoughtful, articulate, and an engaging storyteller. The two met amid the media frenzy that followed Rod’s two-month plight of survival in the Outback, during which time Ansell battled crocodiles and ate feral cattle. The couple built a life together, raising two sons amid the heat and dust of the Outback, but their marriage dissolved as Rod’s deep-seated troubles became increasingly apparent. Joanne’s performance betrays her insistence that she "never gave up" on Rod. Recounting their time together, Joanne’s dust-tinged voice reveals feelings of joy, excitement, regret, frustration, and loving devotion.

This is the story of the real Crocodile Dundee, a gripping biography jam-packed with adventure, romance, and misery.

Joanne van Os was just 22 when she met Rod Ansell. At 23, Rod was already a legend in Australia and around the world, having survived alone for two months without supplies in one of the harshest and most remote parts of northern Australia.

But Joanne came to realize that Rod was both a complicated and deeply troubled man. His life ended in tragedy - out of his mind on drugs, Rod became involved in a shoot-out in which a young police officer was killed.

Outback Heart captures the Territory life vividly: the dust, the heat, the struggle, and the larger-than-life characters. But it's also a deeply moving and powerful story of a love affair and a marriage, and the pain of it falling apart.

"Beautifully written, with a flow that takes hold and never leâ¿¿s go...mesmerizing. One of the biographies of the year." ( Australian Women's Weekly)

Lots of cow punching in the Australian outback

I would have liked more focus on the outback itself, less on catching, herding and killing cows etc.

I have to admit I just got bored with this book and didn't finish it.

What does Joanne Van Os bring to the story that you wouldn’t experience if you had only read the book?

I believe she read her own words, which is a good way to bring a book to life.

Was Outback Heart worth the listening time?

Not for me sorry, too many cows not enough about life in the outback ( without cows).

I was hopeing for a book about travelling in the outback, with descriptions of wildlife but got how to rope ,catch and kill cows over and over again, which wasn't really what I was expecting, although that may be the experience Ms Van Os had its not what I was expecting.

Amazing - Well worth the read.

Was reccomended this book by my fellow truck driver who also does the Brissy to Darwin run weekly and I seriously couldn't stop listening. well done Jo, what a strong woman you are retelling this challenging story. Will be sure to reccomend. Cheers, Sarah.

I could NOT stop listening to this audiobook. I felt as though I was along for the adventure. Joanne Van Os is an incredible writer. I felt their highs and lows almost as intensely as they did. I LOVE Australia and have visited 3 times and greatly admire anyone that can endure the harshness of the Outback. WOW!!!!!