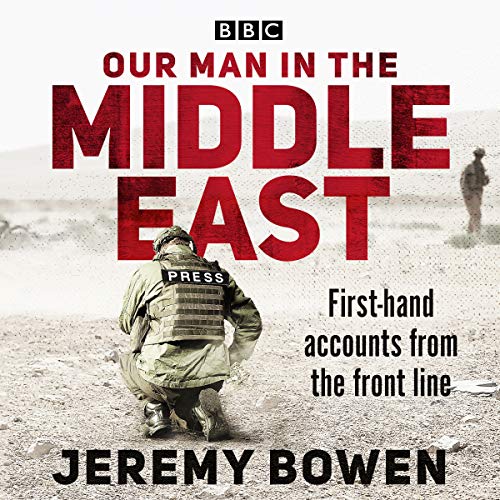 Our Man in the Middle East

Over these 25 programmes, Jeremy reflects on the present and the past of the Middle East, after reporting from the region for more than a quarter of a century. He combines first-hand accounts from the front line with an in-depth look into the region's history. He has witnessed endless wars between individuals, religious groups and full-sized states, jostling for military, political and economic power. He has interviewed dictators, fanatics and fundamentalists as well as the ordinary people caught up in their dangerous games. In that time, the past has always been present, providing motivation and political ammunition. Bowen has made headlines himself and he has paid a personal price, coming under fire and losing a colleague in the course of reporting - on the worst day, he says, in his life.

What listeners say about Our Man in the Middle East

The app does not play the chapters in order and are also labelled incorrect which causes a lot of frustration and confusion. Audible needs to resolve ASAP.

Content of story if very well explained and recommended for non-bias information. Recommended once Audible fix the chapter sequence issue.

I don't understand how Audible can publish this podcast in completely the wrong order. It makes for such frustrating listening and rejigging of the story. Truly unprofessional!

Amazing book, but all chapters scrambled

All the chapters are scrambled out of order, but an amazing account and puts it all in perspective and into a timeline

loved this book. Great insight into the problems of the Middle East and how western governments behave.

A very informative experience narrated by Jeremy brown. This is a book should only be available via audio because a paper copy would not due it justice. If you’re interested in middle eastern society/politics/violence from a semi neutral perspective, this is your book.

An excellent listen but not an easy one.

A fascinating view on the last 25 years in the Middle East but quite an arduous listen. The horrors faced by the people of this region are multitude.

This was a really fascinating insight into an area I know very little about as a westerner, delivered by someone familiar from the BBC in a manner that doesn't require a certain level of expertise.

Possibly likely to arouse the ire of right wingers I suspect as it isn't ardently anti-Palestine and pro-war, but I thought it was pretty balanced.

Any formatting issues mentioned in earlier reviews seem to have been ironed out as this was the same version I heard years ago on Radio 4.

If you're interested at all in this troubled and important region, give this a listen.

this is top BBC journalism
clear, compelling and gripping as well as giving historical context to the middle east. other listeners have commented that Audible have scrambled the chapters but they are all in the right order for me no priblems. strongly recommended.

I just loved (although that might not be the appropriate word) everything about this book, excellent.

Very informative, i’d highly recommend this book to anyone interested in the recent history of the middle east. it does a very good job of showing how the conflicts in different parts of the region are all connected and the harm caused by western intervention.