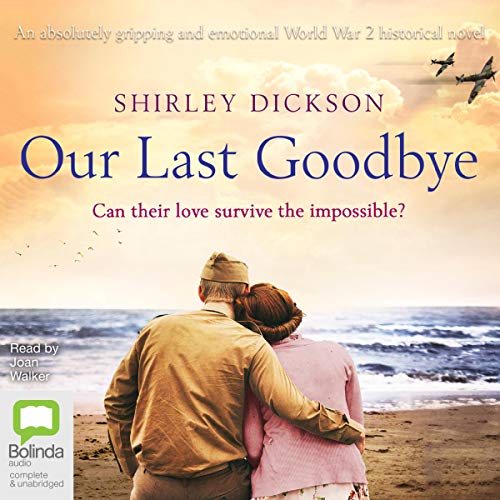 By: Shirley Dickson
Narrated by: Joan Walker
Try for £0.00

A heart-wrenching, poignant and totally unforgettable tale of a young woman who must finally face up to the secret she has hidden for a lifetime.

1943, England: On a foggy night during the blackout, 25-year-old May Robinson watches in horror as her mother, Ivy, is tragically killed. Heartbroken, May is not sure she has the strength to harbour the secret she has kept for so many years - a secret that her mother devoted her life to hiding and that would tear their broken family even further apart. Vowing to make her mother proud, May trains to be a nurse at the local hospital, against a backdrop of wailing air-raid sirens and the eternal drone of enemy planes.

Tending to wounded, ashen-faced soldiers and fighting to save lives, May encounters Richard Bentley, who works at the hospital. But why isn’t he fighting in the war like thousands of other brave young men?

In the darkest of days, amongst death and despair, May and Richard are beacons of hope for one another. But in a perilous time of such uncertainty, and as each longs to escape their past, how well do they really know each other? And when the shocking truth of May’s secret comes to light, can their love survive the impossible?

What listeners say about Our Last Goodbye

I Loved the whole story .

I thoroughly enjoyed this book like all good books it was a very well described situation very graphic but as soon as it came to the last chapter it was very abruptly ended and that always disappoints me. One day one of the authors whose books are going to surprise me by finishing the book with more of a expressive ending. But that being said I would recommend this this book to anyone as Shirley is a brilliant Authoress.

Another great book telling of the struggles, ups and downs of the brave people living through ww2. Thanks

So sad the story ended

Oh my gosh, wonderful story. I got totally lost in the book. The ending was perfect!

Amazingly written it was so full of love,

i enjoyed this book from the begining to the end.I couldn,t stop listening to it.Very well written

this author has had me binge listening to all of her books. I love this series and how she ties them in. you really want to connect to see or hear what happens next. truly loved it!

i absolutely loved this book!!! wonderful author and story. love the stories of May, Etty and Dorothy.

I love the book. was able to keep thing in order. it was a heart warming. ❤

Loved this book, it relaxed me in this time where we all need to find relaxation!

I would give this book top marks, a bit predictable but nonetheless a very good read!
The narrator, Joan Walker made this story even better, her accents and story telling were excellent!

Very predictable, my first time reading this author. I appreciate the clean read but pretty sappy.

Fantastic novel by a great writer!

The author has written a brilliant novel with plenty of intrigue and suspense! The narrator does an excellent job of bringing the characters to life!

I really enjoyed this story. It made me think about what people went through during WWII and made me realize how things are sometimes easily taken for granted.

Great story and well told. Comes to a close a little too quickly. Felt like an editor was trying to rush the story into a certain length.