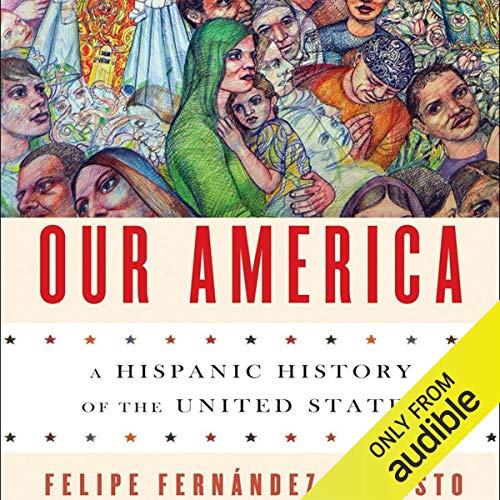 An eminent scholar finds a new American history in the Hispanic past of our diverse nation. The United States is still typically conceived of as an offshoot of England, with our history unfolding east to west beginning with the first English settlers in Jamestown. This view overlooks the significance of America's Hispanic past. With the profile of the United States increasingly Hispanic, the importance of recovering the Hispanic dimension to our national story has never been greater.

This absorbing narrative begins with the explorers and conquistadores who planted Spain's first colonies in Puerto Rico, Florida, and the Southwest. Missionaries and rancheros carry Spain's expansive impulse into the late eighteenth century, settling California, mapping the American interior to the Rockies, and charting the Pacific coast. During the nineteenth century Anglo-America expands west under the banner of "Manifest Destiny" and consolidates control through war with Mexico.

In the Hispanic resurgence that follows, it is the peoples of Latin America who overspread the continent, from the Hispanic heartland in the West to major cities such as Chicago, Miami, New York, and Boston. The United States clearly has a Hispanic present and future. And here is its Hispanic past, presented with characteristic insight and wit by one of our greatest historians.

What listeners say about Our America

A history of America from the West

What did you love best about Our America?

What other book might you compare Our America to and why?

The story of the American West, how it was stolen.

This should be part of the curriculum in US high schools.

I completely agree with the author's underlying thesis that the people of the United States need to recognize our Hispanic heritage in order to reconcile ourselves to the future. This is an important contribution to that effort, so I won't dwell on our minor points of disagreement. I was disappointed be David DeSantos' singsong narration, though, especially when he adopts a sort of Ricky Ricardo accent to quote the English translation of Spanish speakers.

This a a beautiful narrative from the Spanish perspective of what is the United States. Excellent book.

Would you try another book from Felipe Fernández-Armesto and/or David DeSantos?

No this is not a book but a mess. A nightmare of sentences or disjointed thoughts that that the author says began in his head. Who would say something like that. There is no outline, no story, no reference of order. It could be an attempt at how not to write. Save your money.

History of Spain by Walt Disney.

Who would you have cast as narrator instead of David DeSantos?

The narrator reads as if he hates the USA and we should speak Ute.

What character would you cut from Our America?

A character would be a good idea, he uses names but not enough information is given to have a character.

I heard the author speak on CPAN Book TV and thought I would give it a try even though I could bare understand him and he appeared insane. My mistake.