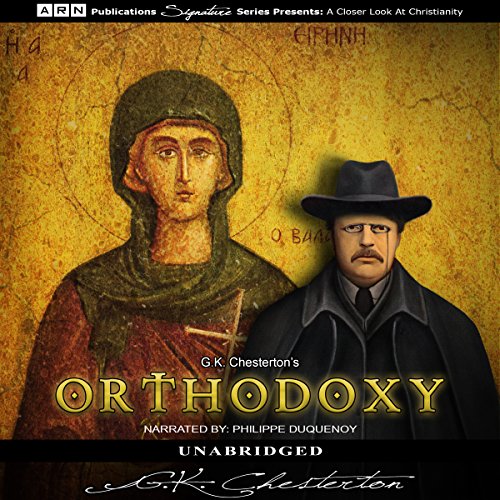 Orthodoxy by G.K. Chesterton is a book from the early 1900s, which explores the reasoning behind accepting Christianity as the logical and true religion. Chesterton begins with the statement of a problem which humanity faces every day. He claims that humans by their very nature have a double need: a desire for imagination and a desire for reason. This could also be seen as the desire for the logical and the desire for the illogical. Individuals seek a balance between the two extremes, and the fulfillment of this balance is what leads to internal peace and satisfaction.

Chesterton asserts that the only faith which can fulfill this difficult double need is Christianity. The principals of the faith allow for some interpretation of truth, but also are consistently clear about the differences between good and evil, and right and wrong. The book acts as a guide which explains how Christianity is the best choice for all human beings, not because it's outside of our world and an independent truth, but because it is the answer to our base needs and desires. Only when Christianity is seen as a way of life instead of a belief can the true power of the faith be realized.

The book is good, but so confusing.... Definitely the reader doesn't help, I'll try to get a printed copy and read myself.

I've been through this three times and I'm still unpacking it. Chesterton' thought is lucid, funny, and (as stated in the title) Deep. If you are agnostic and frustrated at not hearing a good argument for God (let alone Christianity), this book will be the fire hose you always wanted to drink from!

One of the best books I have ever read/heard. Started out reading the print but decided to purchase the audio also. Have now read and listened to it twice. The narrator for the audio was superb. I wish I had been told about this book 20 years ago.