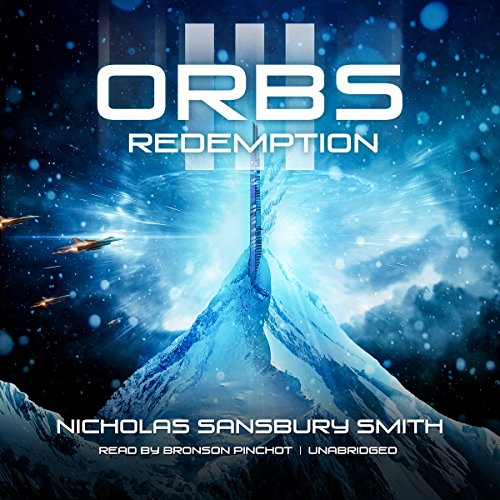 By: Nicholas Sansbury Smith
Narrated by: Bronson Pinchot
Try for £0.00

At the end of the world, who do you save?

There's sabotage from within and a strange virus is infecting the last human survivors of an alien invasion in Nicholas Sansbury Smith's smart and exciting third book in the best-selling Orbs series.

With the alien armies growing stronger, Sophie's biosphere decides to join forces with the team from NTC's submarine. Using data from a surviving satellite, they discover strange alien poles at each of the world's seven highest summits: alien technology that the survivors believe may hold the key to shutting down the alien ships once and for all.

But before the two teams can launch an offensive, the biosphere must deal with sabotage from within and a strange nanotechnology that has infected several of the survivors. As tensions rise, Sophie and team must decide whether their new discovery is worth abandoning the biosphere. The more the team learns, the more they realize that Earth may be beyond saving and that salvation may require leaving the planet forever.

What listeners say about Orbs III

The war for the planet

Great melding of Earth's military technology with sci-fi aliens. Ends on what we hope are two great cliffhangers.

My only complaint is that it didn’t last long enough. The storyline will keep you engaged from start to finish and in this last book of the series, the strong character development (my personal favorite being submarine Captain Noble) really shines. The author has put them all through “hell” and done a superb job of showing their resilience in the face of near extinction.

Redemption is the third book in the Orbs series. Dr Sophie Winston continues to be the main character. Many other strong characters have come and and gone. Nothing will deter Sophie from saving the human race.

Action packed page turner like its predecessors, Orbs 1 & Orbs 2. This is an evolving story that keeps pushing forward fast. That’s why it’s so addicting. The aliens taking over earth are beyond anything anyone understands. Until this new plan Redemption is hatched. Redemption is the plan to save earth. You will have to read it to see how that goes.

When I can’t read these I listen to the Audibles. Sometimes life just gets in the way. The narrator does an amazing job giving this book life. I will never forget the way the narrator adds the necessary sound effects which are vividly described in these books.

Good conclusion to the series with a twist for the Bio team. The ending isn't fully satisfying, but of course the author can't always tell the true fate of their characters. Great narrating by Bronson Pinchot and kept me intetested in listening.

I still plan to continue the series, but I really have to say I prefer the first two books over the third book

Great addition to an amazing series!

I have to say right here and now that I was thrilled Nicholas Sansbury Smith decided to write a fourth book, the fact that Anthony J Melchiorri is co-writing it is just icing on that cake of awesomeness. Cause let me tell you... I needed a fourth book.

Back to this book... I love the fact that this book ended as it did, I just need it to not be the final ending. Too many questions that I need answered. This has been a dark twisted tale that led me places where I KNEW what was coming next and... wait a minute, that DIDN’T happen. How did that not happen? I absolutely loved that even as I wanted to yell at the author. I sat there going ‘no. That did NOT wasn’t how that was supposed to go!’ However that was exactly how it went. Every time. Love this book and the series just keep getting better.

Let there be more

I really love this book series. I hope that Nick Smith will continue to write it. The characters are lovable and detestable. The aliens are terrifying and sinister. You have hope built and tore down. This book is a really hard one to put down. I highly recommend it! Pinchot brings an amazing depth to the book that I did not have before listening to it.

In Orbs 3 mankind fights the alien monsters on the land, in the air and on and under the sea. Our military is dedicated and honorable with Captain Noble leading the struggle. Our scientists continue to come up with creative inventions to help in the fight and our children show humanity's heart and hope as they face the absolute terror of the spiders relentless pursuit of Earth's remaining survivors.

This is a grim struggle but I could not put the book down or stop listening. The author and narrator make me feel the emotions and travel this journey with the characters. When I finished this book I could not wait for Orbs 4 because I could see the promised hope for the future and I wanted to see where the creative Nicholas Sansbury Smith will take his readers.

This is one heck of an action packed book. I'm really glad Bronson Pinchot re-narrated the series as I've stated in other reviews. He really brought the story to life and it was good to have one narrator for all four books. If you enjoy post apoc fiction Nicholas Sansbury Smith and Bronson Pinchot are a great team!

One dimensional characters, not engaging.
Story limped along without any intensity. The end was very disappointing!

what a gripping intense action story. the characters are well developed and the narrator brings them to life. this book will keep you on the edge of your seat as you wait to hear what happens next. love it.