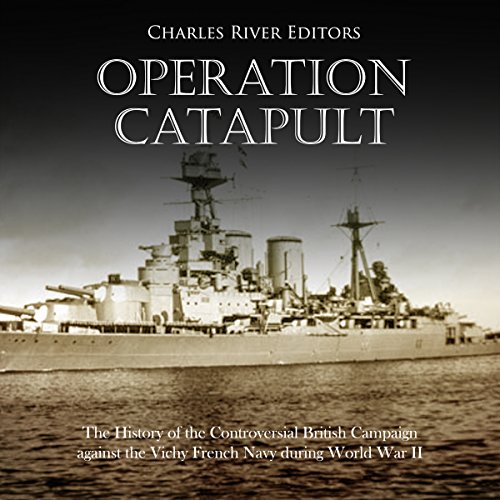 “You are charged with one of the most difficult and disagreeable tasks that a British admiral has ever been faced with. But we have complete confidence in you and rely on you to carry it out relentlessly.” (Prime Minister Winston Churchill)

“90% of senior naval officers, including myself, thought [Operation Catapult] a ghastly error and still do.” (Royal Navy Admiral Andrew Cunningham, 1950)

Emerging from France's catastrophic 1940 defeat like a bedraggled and rather sinister phoenix, the French State – better known to history as “Vichy France” or the “Vichy Regime” after its spa-town capital – stands in history as a unique and bizarre creation of German Fuhrer Adolf Hitler's European conquests. A patchwork of paradoxes and contradictions, the Vichy Regime maintained a quasi-independent French nation for some time after the Third Reich invasion until the Germans decided to include it in their occupation zone.

While the French later disowned the Vichy government with considerable vehemence, evidence such as fairly broad-based popular support prior to Case Anton suggests a somewhat different story.

Of course, this precarious position left Britain in the unenviable position of figuring out what to do with its once erstwhile ally. France is seldom deemed a maritime power, yet during World War I and in the interwar period, the French Navy developed into a relatively powerful fighting force. While it could not rival the British, American, or Japanese forces, it represented one of the medium-sized naval powers like Germany or Italy. As such, the French Navy would have an interesting role to play in the development of the Vichy state during World War II.

While the Third Reich naturally cast covetous eyes at the powerful French naval vessels in the hands of their ostensible Vichy ally, they proved content to see those ships remain neutral for several years after their victory in Western Europe. Only when the French changed their allegiance in the direction of the Allies did the Germans make an attempt to seize the French vessels.

British Prime Minister Winston Churchill was not so content. The actions he initiated - opposed by many of the British naval officers involved, but nevertheless dutifully carried out - embittered relations between France and England for a generation. The stern leader showed a certain ruthlessness and even spitefulness in dealing with both neutrals and weaker allies during the war.

This somewhat unflattering side of Churchill’s character emerged in his dealings with Vichy as well. Despite the assurances of Darlan and others that the French would never hand their ships over to Germany, Churchill would put in motion a campaign attempting to destroy their fleet. As a result, the one-sided Operation Catapult would be one of the most controversial and unique episodes of World War II.

What listeners say about Operation Catapult

Unless I have not listened carefully or I am mistaken but wasn’t Operation Catapult also including the French fleet in Alexandria called Force X under the command of Admiral Godefroy who dealt with Admiral Cunningham a gentleman agreement?