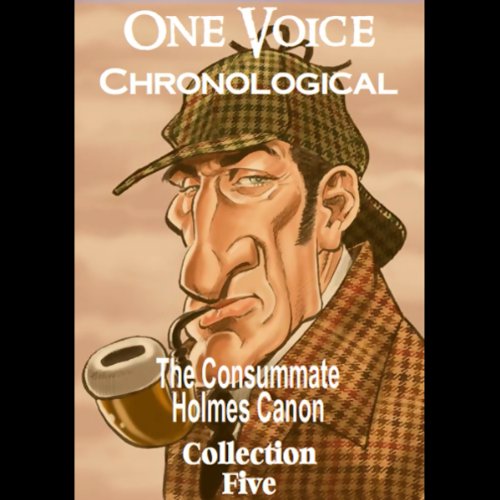 Six more cases solved by Sherlock Holmes: The Adventure of the Dancing Men: Hilton Cubitt, from Derbyshire, consults Holmes about a series of dancing men picture-messages his wife is receiving. On their wedding-day, she had made Cubitt promise he would ask her nothing about her past, but she now seems to be terrified. Holmes has to decipher the code of the matchstick men and get to the bottom of the dreadful murder that lies behind it.

The Adventure of the Solitary Cyclist: Sherlock Holmes first regards the experiences related by newly arrived visitor Violet Smith with a degree of impatience and disinterest. This solitary cyclist, however, is being shadowed by a mysterious man on a bicycle as she travels to and from her new employer's home as a music teacher.

The Adventure of the Priory School: In desperation, Holmes is asked to rescue the kidnapped only son of the Duke of Holdernesse.

The Adventure of Black Peter: Dr. Watson's account of the strange death of Captain Peter Carey begins one morning with Holmes returning to Baker Street with a "huge barbed-headed spear tucked like an umbrella under his arm." The instrument, the facts unfold, duplicates the weapon that has been driven so violently through the victim's body that it has been discovered pinned to the wall like an insect.

The Adventure of Charles Augustus Milverton: Holmes and Watson push the limits of the law when they confront the machinations of a blackmailer whose victims either pay dearly or suffer life-destroying humiliation.

The Adventure of the Six Napoleons: The destruction of duplicate plaster casts of the famous head of Napoleon by the French sculptor Devine becomes more than a mere curiosity to Holmes when a murder is committed during the commission of one of the crimes. The case begins at the shop of Morse Hudson, who sells pictures and statues in the Kennington Road.

What listeners say about One Voice Chronological