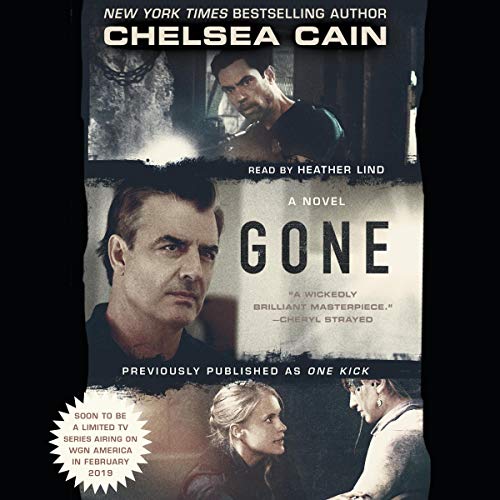 From the critically acclaimed author of the Archie Sheridan and Gretchen Lowell series, an “utterly exhilarating and emotionally rich” thriller that will have “your heart in your throat” (Megan Abbott, best-selling author of Dare Me).

Twenty-one-year-old Kick Lannigan is a survivor.

She can pick any lock, fire any weapon, throw any knife, and aim a punch at her opponent’s trachea. And when the enigmatic John Bishop shows up asking her to help him rescue missing kids, Kick has every reason to be wary. He appears to have access to limitless money, high-level contacts, and details of Kick’s background long kept sealed by the court. Yet everything he tells her about himself seems to be a lie.

Headstrong by nature, suspicious by circumstance, and a smart-ass by self-determination, Kick can’t help but see the writing on the wall: together, she and Bishop could make an unstoppable team, willing to do whatever it takes to see justice served…if they don’t kill each other first. For Kick, whose interest in child abduction is deeply personal, it’s a gamble worth taking.

Critically acclaimed as “excruciating…compelling” (Booklist, starred review) and “propulsive” (People), Gone is a high-octane and hard-hitting thriller you won’t be able to put down.

What made the experience of listening to One Kick the most enjoyable?

I love the characters.. Chelsea really knows how to bring her characters alive. I listened to it over two days and now I'm eager (to say the least) to find out when her next book is out!

Have you listened to any of Heather Lind’s other performances? How does this one compare?

This is the first book I have listened to in which heather narrated. I really liked listening to her, I hope she narrates the next book.

as always, love the flawed characters and the storyline is captivating in its honestly. brilliant!

Good book. I hope the series gets better.

The premise, the story, and the characters were all good. Kick, the main character, is a great herione, and the potential of where this series can go is very intriguing. But there were some flaws in the development.

The character development was odd to me. There's a difference between giving the character some depth and history and making the character someone the reader cares about and believes in. There was a lot of energy and detail around Kick. She has a lot of history, and a lot of emotions that go into her solving mysteries--all of that was really interesting. But there were some contradictions in her development that I had a hard time with, so I was taken out of just enjoying the story by stopping and thinking "hmmm, that didn't make sense."

With all that said, I WILL read the next one, with hope that the bumpy writing smooths out. The potential is that good.

The narrator was great, she was perfectly invisible, I didn't notice her and could just concentrate on the story.

I recommend this book, but would say keep expectations low. Think of it like watching the pilot of a show that could be really great, once the kinks are worked out.

I honestly could not stop listening to this.

Would you consider the audio edition of One Kick to be better than the print version?

I did not read the print version but the narration is superb.

I liked the characters from the beginning and cared what happened to them. The psychological narration and dramatizations were dead on accurate. I'm a psychotherapist and work with traumatized people. I usually dislike fictionalized descriptions of psychological reactions; most authors get it wrong. This one does not.

Have you listened to any of Heather Lind’s other performances before? How does this one compare?

I have not; this is my first. But I plan to listen to more.

Who was the most memorable character of One Kick and why?

Aside from Kick Lannigan, I sort of fell in love with John Bishop. :-)

I loved this book. I'm sorry this is the first one because I want to listen to more of them right now!

What a horrible book...

I found myself about two thirds of the way through reading this book wanting to quit reading so much that it took everything I could to keep going to the end. I don't like reviews that say, "i couldn't make it through the book but here is my opinion"...blah blah blah. I've read books that the final 1/3 actually justify the difficult first parts of the book, but such is not the case with this extremely annoying book.

First off, many would have issue with the subject matter, but that isn't what was so bad about this book. Taking something as horrible as child abduction and sex slavery and putting it into a story can work, but obviously it needs to be done well. Here, sadly, it isn't. I honestly couldn't stand every person in the book, Kit (Kick) included. There wasn't a single person worth my time, but to have to listen to Kit make the absolute DUMBEST decisions in the world, when she is supposed to be "trained" in how to do extreme self-defense she fails in almost every situation. Are you kidding me??? The books climax was completely frustrating and i found myself actually yelling out, "are you kidding me????" to nobody in particular because i couldn't believe i'd wasted so many hours on this horrible book. I will be getting a refund pronto and hopefully helping others to not read this crap...

Ms. Cain does it again!

Chelsea Cain can tell a great story. I'm looking forward to more Kick stories. She starts out slowly, then everything starts heating up and her ending are satisfying. I am hooked on Ms. Cain! BRAVA!

A better developed heroine, to start.

The book had an interesting premise, but never lived up to the publisher's summary. Or, the opening quote from which I assume the title was derived.

It was as if the author had an idea of what a strong, tough, damaged heroine should be, but never figured out how to bring her to life. Also, the sensitive subject matter was poorly handled.

Kick this one to the curb!

Tremendously disappointed in this book. I've read & enjoyed Chelsea Cains' Sheridan/Lowell series and thought this newest book would rise to the same standard. Boring and simplistic.... not one compelling character, childish dialogue and less than compelling plot.... blah! Too much torment, too many second thoughts, and oddly, not enough action.

I don't like this question. You could not turn this book into a 4 or 5 star experience without completely rewriting the story and giving it a contiguous plot rather than a string of contrived sexual and action scenes.

Has One Kick turned you off from other books in this genre?

No. It just taught me to avoid works from Ms. Cain.

What does Heather Lind bring to the story that you wouldn’t experience if you just read the book?

Heather Lind does an excellent job of expressing the mind of Kick. I truly believed I was listening to Kick's voice. I am sorry she is tied to this particular work.

This story was good in concept. A sexually-abused girl that was rescued from the world of kiddie-porn has a chance to fight back at the community of sickos that wronged her, as well as save others trapped by the villains. However, the execution is poor, with a thin story line that hops from one shock scene to the other. The author seems to revel in Kick's psychosis, exposing a sexually abused girl to odd reader voyeurism with the shower scene and the sex scene with Bishop. Cain takes gratuitous advantage of the victims of kiddie-porn with no understanding of the real psychological damage they have suffered. Sadly, I'm sure the literary community will call this "ground breaking."

Kick's litany of "skills" and the twisted manner in which she supposedly acquired them is just plain silly.

Cain's ONE KICK Is Addictive!

Where does One Kick rank among all the audiobooks you’ve listened to so far?

One Kick is one of the top five audiobooks I have listened to.

What other book might you compare One Kick to and why?

MEAN STREAK, because both kept me guessing and were filled with well developed, fascinating characters.

Without spoiling for others, near the end when Kick is surprised in her apartment.

The description of Kick going to see her kidnapper on his death bed.

It keeps you turning pages and now we must wait for the next Kick thriller!

One Kick Kicks to the Top of Books

Kick Lannigan kicks herself to the top of my favorite mystery heroines in this first of what I hope to be a great series by Chelsea Cain. Finally emancipated from a narcissistic mother who has exploited Kick's rescue from a kidnapping years prior, we meet Kick in the early stages of her figuring out who she really is. She is talented in self-defense, but still not mature in accepting what has happened to her in her life, although it is not for lack of trying.

Enter Bishop who wants to take her back to the years of her childhood when she lived with her kidnappers. And who exploits her obsession with missing children.

The set up is quick. The action is continuous. There is personal growth exhibited by the characters and there are not too many people to keep track of. The tension and twists never end; not even at the end. The book is so good that I had a hard time deciding whether to risk getting my electronic equipment wet while I took it into the ocean with me. In the end I put it down, but was quick to get back to it. I finished it in less than a day.

Cain sets up a great heroine with a great cast of characters. I can't wait until Book 2 comes out. Heather Lind, the narrator, reads it very well. I hope she continues to be the narrator because she has now defined the characters through their voices.

This is a terrific read.

I'm chintzy with stars but an enjoyable story

despite the horrifying context of pedophilia, our heroine will win your heart and i guess I would even read another one. I did keep waiting for Kick's hair to figure more prominentl in the action, didn't you??