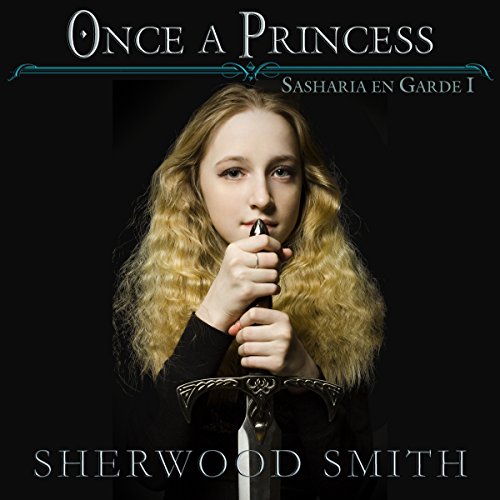 Sasha's mother, Sun, was once swept away from a ren faire to another world by a prince - literally - but there was no happy ending. Sun's prince disappeared, and a wicked king took the Khanerenth throne. In the years since, Sasha and Sun have been back on Earth and on the run. Mom and daughter don't quite see eye to eye on the situation - Sasha wants to stand and fight. Sun insists her prince will return for them one day; it's safer to stay hidden. Then Sasha is tricked into crossing the portal to Khanerenth. She's more than ready to join the resistance, kick some bad-guy butt, and fix the broken kingdom. But is the stylish pirate Zathdar the bad guy? Or artistic, dreamy Prince Jehan?

Back on Earth, Sun is furious Sasha has been kidnapped. Sun might once have been a rotten princess, but nobody messes with Mom!

Warning: This title contains a kick-butt mother-daughter team, a wicked king, a witty pirate with an unfortunate taste for neon colors, inept resistance fighters, a dreamy prince who gallops earnestly hither and yon, and a kick-butt princess in waiting.

What listeners say about Once a Princess

A fun swashbuckling book, actually half a book.

I really enjoyed this book and its second half, Twice a Prince. In fact, this review will be encompassing both books, with the only difference being my impressions of the two different narrators. I don't think a person should read Once a Princess as a standalone unless they want to be quite disappointed because its really the first half of a bigger book.

I must thank Sherwood Smith for giving me the chance to listen to both of these audiobooks by generously offering me Audible codes.

I really liked the female characters in these books. They had guts and integrity as well as ingenuity and loyalty. For most of the story, Sasha and her mom, Sun, each have their own adventure and challenges, even though they are heading in the same direction. The POV varies back and forth between them.

Sasha was an admirable young woman, in that she had taken her self defense lessons in her youth seriously, knowing some day she might really need to use them. But at the same time, she embraced her life in the U.S. and didn't sit around thinking 'oh, one day I'm going to be princess so I am better than everyone else'. When she was sucked back into the realm of her birth, she was everything she needed to be; smart, resourceful, cautious and determined. And she had ample opportunity to put her self defense training to good use. Fun sword fights and swashbuckling ensued. Despite all the action, I liked that she never lost sight of her goal of finding her father.

Sun had a bit of a trickier time pursuing her goals since she was a prisoner for much of the book, however, when the opportunity arose, she found her own way to rouse the kingdom against the bad guys and seek out her lost husband. I had a chuckle at her struggles with hot flashes. Its such an annoying fact of life that half the population deals with yet it rarely gets factored into character development. Hats off to the author for that one.

I really enjoyed Prince Jehan and the pirate Zathdar. Quite a bit of the humor of the story was woven into these characters. (view spoiler)

Most of the other main characters in the story were various members of the 'bad guys' but they were painted with enough depth to make them interesting and even sympathetic to some degree. Although I must say that while King Canardan wasn't a solid black villain and he had 'nuances' his war commander was pure evil. You have to have at least one really bad guy right?

This story was a fun adventure that can appeal to young readers as well as adults. The second half had a bit more in the way of romance but it was still very subtle. There is a HEA for Sun as well as her daughter which is appealing to the part of me that loves a romance story.

One final note with respect to the narration of the audiobook. The narrator, Jessica Almasy is new to me. At first I didn't like her voice that much because it was too young and girly sounding. However, throughout the book she won me over because she had the main thing I like and that is consistency. She managed to do distinct voices for most of the characters and stick to them well enough that you could always tell who was speaking just from the intonation and accent.

The Narrator gives people random accents with no correlation to the story. Also she can't keep the hero's accent straight. He has at least 3 different accents and voices. Sometimes his voice changes in the middle of a conversation and you can't tell who is talking.