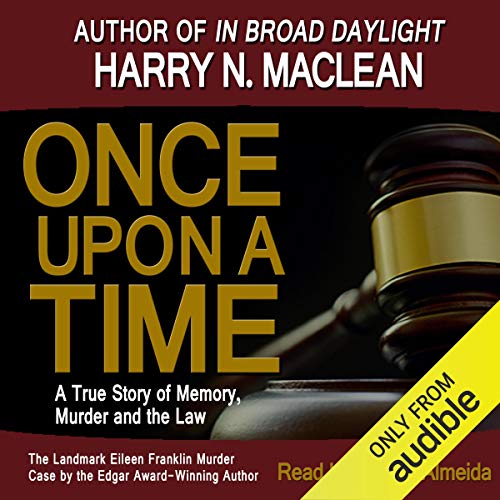 Once Upon A Time, A True Story of Memory, Murder and the Law

By: Harry N. MacLean
Narrated by: Wendy Almeida
Try for £0.00

In 1989, Eileen Franklin, a young California housewife, claimed to recover a repressed memory of her father killing her playmate 20 years earlier. In a landmark trial, the father was charged and convicted of first-degree murder, based solely on his daughter's testimony. This book chronicles the trial, explores the remarkably dysfunctional Franklin family and delves into the credibility of repressed memories as evidence.

This version contains a 2011 Epilogue, which details the reasons for the reversal of George Franklin's murder conviction and the refusal of the district attorney to retry him for murder.

"A tragic but gripping story, and expertly crafted. Mr. MacLean has a positive talent for detail, and an obvious knowledge of the law. I congratulate him on a masterfully told story" (Steve Martini, author of Compelling Evidence)
" Once Upon A Time is a well-written and meticulous account of a true human drama. The uncharted terrain of the human mind and its ability to repress as well as deceive are fascinating food for thought." (Nancy Taylor Rosenberg, author of Mitigating Circumstances)
"MacLean gives us a fascinating look at a fascinating crime." (Tony Hillerman, author of Talking God and Coyote Waits)

What listeners say about Once Upon A Time, A True Story of Memory, Murder and the Law

Too long boring at times stuck with it hoping that I would get into it .

As an avid true crime lover I especially enjoyed the detail in this book. The entire court case was told in such a way to make you feel as if you were there. Too many true crime stories assume guilt based on a conviction, in this tale the reader is allowed to make up their own mind. I found myself wondering what I would have done had I been on the jury, with the facts that the jury was given, and also trying to decide what I thought with all the facts. That was an interesting change for me, as usually my option of guilt is decided before the book even makes it to the courtroom.

The narrator did a pretty good job of portraying the different speakers, although there were moments that she annoyed me in her attempts to do this. Overall though, she added to the book and did not take away.

This book had you on the edge of your seat. I was late for a lot of appointments because I didn't want to get out of the car. Ms. Wendy did an awesome job narrating the story.

Had to listen on faster speed. Narration is too slow and tedious.

Interesting subject matter. Be prepared for a slow narration.

Where does Once Upon A Time, A True Story of Memory, Murder and the Law rank among all the audiobooks you’ve listened to so far?

This ranks among my favorite Audible books. I remember this story from the '90s and the facts are very different than what was reported at the time. This story details an abusive and extremely dysfunctional family and a father accused of murder by his daughter. The author presents a believable psychological explanation and a 2011 update.

A good book by a good author, well narrated.
If you read this book and enjoyed it you might consider getting "In Broad Daylight" by the same author. It was VERY good.

I had a hard time with this book. I was unsure of the authors intent at several points because of the narrators delivery. It occurred to me that it may have been vague for the narrator as well so she did the best she could in interpreting through inflection. Still, although I found the basic facts gripping, I was not a fan of how the author portrayed behaviors of the female victims and the way he described the appearance of the prosecuting attorney. False memory syndrome is fascinating and I'd like to find titles that focus on the emerging science of such. All in all I walked away wondering if the author has ever known anyone that was a victim of abuse or incest because he seemed like either a closet chauvinist or the bitter ex of a victim.

This was an engrossing book....I appreciated the detailed account of the trial in particular. I found the narrator distracting. She repeatedly mispronounced a term commonly used in the criminal justice realm: the abbreviation for 'preliminary hearing' is said 'PRE-lim' and not 'pre-LIM' as the narrator pronounced it...over and over. I also disliked her attempts at a Southern accent and the voice she gave to Barry...she made him sound like a stereotype. I'm sure she's a great narrator on other books, for she has a beautiful reading voice. I just don't think she worked for this one.

Couldn't get into it

The performance is so off I couldn't make it to the end of the second chapter. My mind kept wandering.