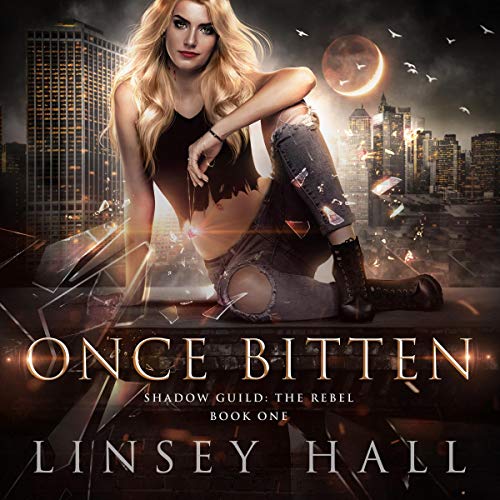 My idea of a party is hanging out with a mini box of wine and a raccoon. So yeah, I need a life.

When I’m accused of murder, things get wild. One, I learn that I have magic. Two, there’s a secret magical city hidden right in London itself. And three, the only one who can help me is a vampire who’s sexy as sin and scary as the devil himself. He's called the Devil of Darkvale and he all but owns Guild City.

My life is on the line if I don’t solve the murder, which means surviving in this new world of witch parties, magical guilds, and a vampire with a tortured past. He drives me insane, but if I want to save my own life, he’s also my only hope.

What listeners say about Once Bitten

For a book based in the UK the language is completely off but using the narrators true accent would overcome some of this.

I believe the narrator is Canadian but putting on the most awful English and Scottish accents, often staying in ‘Scottish’ mode long after that character’s stopped speaking.

It really is some of the most atrocious narration I have ever heard.

The idea is interesting but the reading felt simple and missing something. New best friends a bit too easy. I personally am a little icked out by a vampire bite as practically orgasmic. At least in the now infamous Twilight series, the good vampires stuck with animal blood and it was properly considered a predator/prey scenario.
I’m guessing author is young since ridiculous drinking games and drinking in general kinda prominent.
I was interested enough to find out what happened in the end though to read the whole thing, so that’s saying something for the story. Not sure continue though. I get more hooked if conversations are entertaining.
Narrator had a cool accent. It was British with some other accent flavoring it. She did an okay job.

Enjoyed the characters, the story was a good start to a series but couldn’t stand the audio voice unfortunately I gave up on the audio and read the ebook myself. Hopefully the next book is a better read :)

This is one entertaining and fascinating book and I loved every word of it. I enjoyed Linsey Hall’s writing style and the imaginative storylines, characters and world dynamic she created. I was swept right into the story and it captivated my attention from start to end. I found it all enthralling and did not want to put the book down beaus I needed to know what happens next. This book takes you into a world hidden in the shadows of the world we know, it is a magical world filled with different types of paranormal beings. Carrow lived her life not quite fitting in, her best friend was a raccoon who lived in the alley next to her apartment. She always had a special power to see things and when she if found at the scene of a murder, she is arrested as the prime suspect. One of he officers believes she is innocent and gives her the opportunity to prove it and she finds herself on the run and runs straight into a hidden world looking for someone she saw at the scene of the crime. She makes a friend, Mac, and then learns things about herself, her friendly raccoon too. There is never a dull moment in this book, the story is brilliantly plotted with plenty of drama, action, twists and turns, mystery, some heartfelt and emotional moment and even the start of a diabolical romance. Linsey Hall, thank you for this wonderfully fascinating story, I am looking forward to what comes next for these amazing characters. Carrow is such a bad@ass, love her new friends, even liking the mysterious Devil of Darkville.

Laurel Schroeder is a fantastic narrator and voice artist. She does an awesome job portraying, bringing them to life, giving each their own voice and personality. Her take on Carrow was perfection, she grasped her persona with perfection, she handled all the secondary character perfectly too including her take on the Devil, which was spot on too. She is a talented and entertaining storyteller and a pleasure to listen to. Thank you for another awesome listen🎧

Cool beginning! Fun magical adventure! Love these books because they have tough women characters, fun side characters, and I know there will be some awesome action and adventure! Also, I’m loving the romance elements in this one between Carrow and Devil; excited to read more about that development. I listened to the audio version on Audible, and the narrator did awesome. The story takes place in London, so she has an accent, which was fun. She fit the characters and story well. A fun listen!

This one starts with a murder, and Carrow is suspected because she’s found over the body. Not exactly the smartest choice for her, but she can’t help but try to stop the murder after having a vision of it. Carrow has visions when she touches things, so she keeps trying to help even though it looks really bad. She had a friend who was killed, and this murder looks the same as her friends; on top of being arrested for murder, Carrow definitely needs to solve this murder. Also, there’s a mysterious man with gray eyes and fangs that she sees in her visions; despite him being in the vision of the murder, she can’t help but be drawn to him. Carrow is going to find a whole world she had no idea of; she’s off on a magical adventure! Love all the action! Books by this author always make me happy; they are lots of fun! Looking forward to the next book!!

Narrator took a little bit to get used to

Once I got used to the narrators voice, I was able to enjoy the book. Fun, quick, book.

Looking forward to the rest of the series

narration voice was a bit annoying but I kinda got used to it towards the end. Great storyline. eager to read the rest of the series.

A very fun book to listen to with many chuckles from solo or character interactions along the way!

I couldn't turn it off, amazing!!! I just bought the next book and can't wait for the story to unfold!

Once Bitten is a pretty good urban fantasy mystery. The characters are interesting and the story is well developed. I look forward to the next book.