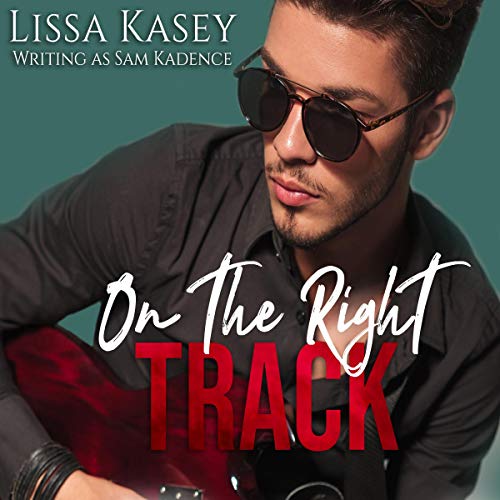 On the Right Track

By: Lissa Kasey
Narrated by: Michael Stellman
Try for £0.00

Ru Nakimura was a boy band superstar until his ex-boyfriend outed him. Now he’s in hiding in the Midwest to avoid the press and the ensuing storm of judgment. He never expected his dream guy would be a high school jock that he meets at a small-town library.

Adam Corbin is a high school football star on the verge of graduation. He has big plans of escaping his small town and living life unafraid of being a gay man. However, seeing how his openly gay friend has been treated, Adam stays away from socializing, and focuses on fading into the background to avoid exposure. The last thing he wants is to have everyone examining his life.

When Adam and Ru have a chance encounter, sparks fly. Ru wonders if it’s okay for him to still be a musician and openly love another man. And Adam dreams of finding the courage to love openly even if doing so brings his life into the limelight. Will their love survive the scrutiny of the world?

Note: This book was previously published under the pen name Sam Kadence. Content has not changed.

What listeners say about On the Right Track

This is one of my all time favourite YA books so it will never be less than a 5 star story. I think the narration by Michael Stellman compliments the book wonderfully and I love the many "younger" voices he employs.

If you could sum up On the Right Track in three words, what would they be?

What other book might you compare On the Right Track to and why?

Aristotle and Dante discover the secrets of the universe. The characters, story and situations are similar. They are both well written and narrated.

Which character – as performed by Michael Stellman – was your favorite?

No, it made me think and kept me wildly engaged.

Seventeen year old Ru Nakimura has few people in his young life he can trust. His mother is an absentee parent in every way, unless she needs money. His father who lived and breathed turning Ru into the best musician he could be, walked out and abandoned Ru at just thirteen when Ru confided in his father he liked boys instead of girls. Recently outed by his fame hungry ex-boyfriend and subsequently kicked out of his band for refusing to go back into the closet, the only person he can rely on is his best friend and former band mate, Tommy.

Sixteen year old Adam Corbin has coasted through life virtually unscathed. He’s not a jock, or a brain, or emo, he is just Adam. Until the afternoon he sees the intriguing young man with black hair and beautiful eyes in the library, Adam never really realized he was gay because he never put much thought into it. His mission in life is has to been to make as small an impression as possible, coast under the radar, it’s safer that way. These two young men that have gone out of their way to be invisible, start to shine and glow once they meet each other. Adam is participating more in school, he is more confident and secure in his own skin now that he has Ru in his life.

But being a gay rock star in the world today doesn’t come without its pitfalls. Ru has to go out of town a lot for appearances and shows, which is hard for Adam to deal with at times. And then the mixture of a power hungry, former band mate of Ru’s and a deeply closeted former friend of Adams, becomes dangerous and volatile. Adam and Ru will have to grow up way too fast and sacrifice part of their youth on their journey to happiness.

This just might be the best contemporary gay YA story I’ve ever listened to. For starters, it was rich with content, for just over five hours it felt more like I’d been listening for days I got so much content. The characters were perfectly penned for their ages, the situations they faced, the decisions they had to make included some immaturity arising occasionally and played out perfectly. Adam is very young a little bit naïve, his parents have been kindly strict. He has a curfew and rules and consequences, and most important, he is not allowed on social media. This placed him inside almost a protective barrier, so his reaction to things that happened in the story were so innocent and natural.

Ru is almost polar opposite. For someone only seventeen years of age, he has experienced more pain and disappointment than some grown ass men. His father shaped and molded him into the best musician he could be and then in one nights time, walked out of Ru’s life forever rather than raise a gay son. His ex-bandmate is so insanely jealous of Ru, his talent and his accomplishments, that he makes it his life mission to make Ru’s a living hell. Including getting Ru’s ex to out him publically, but he crosses a line when he goes after Adam.

And while I loved everything about this story from start to finish, I think that the conversation at the breakfast table when Adam told his mom he was gay and she just reinforced her unconditional love, barely blinking, was the best thing about this story. Parents of LGBTQ young adults and teenagers should have to spend a day with Adam’s mother, so she can teach them how to react to your child telling you he is gay. There is no reaction! You love them without strings, the way god intended it to be when he loaned you that precious soul to raise.

As I said before, there is a lot of content. Life, love, bullying, brief thoughts of suicide, friendship and tolerance. The balance between the hate, anger and abuse of some people that surround Ru and Adam is perfectly balanced with love, understanding and support from the people in their life that truly matter. Definitely an age appropriate story about two young men that find each other in the strangest place, fall in love, and fight ignorance and intolerance in order to be together. But the story is so well written I think it will appeal to listeners of all ages.

Narrated by Michael Stellman who was able to immerse himself into the various characters of the story easily, changing tones and nuances from the start to match the way the different characters were written. I could hear the innocence Adam carried in the way Stellman told his story, and while Ru was more wise in the ways of the world, he is only seventeen, and Stellman captured that worldly smart but sometimes confused characterization. I cannot wait for the sequel, Unicorns and Rainbow Poop, to become available on audible. Bass was such an eccentric character, I can’t wait to listen to his story.

Michael Stellman delivers another terrific performance. I loved the narration, and was kept engaged and interested throughout the story and a maybe even a little sad to see it end.

I like Young Adult stories…the hormones and the craziness of that time in our lives when everything was SO MUCH! I can’t say I loved the story because, frankly, the story was just a smidgeon too over the top. This is like Romeo and Juliet without the crazy feud and suicide. Or the marriage, or the…

Okay, so it’s not like Romeo and Juliet except they’re both super young and fall instantly in love upon seeing each other and become way too dependent on each other.

Anyway…it’s a sweet story overall, though there were some parts that bothered me…and the story glosses over quite a bit, and then gives what I found to be a rather abrupt ending. I would have liked to have found out what happened with quite a few points…

On the whole the excellent narration keeps it from becoming too saccharine sweet and kept me from thinking too long on the spoiler points, and overall it has a good, if heavy-handed, anti-bullying message.

Love this story of hope and love. The voice actor is soothing though some of the voices are a little odd but good for variation.