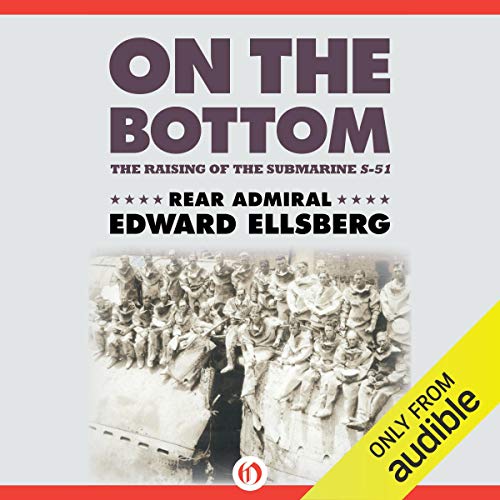 The Raising of the Submarine S-51
By: Edward Ellsberg
Narrated by: Stephen Hoye
Length: 9 hrs and 31 mins
Categories: History, Military
4.5 out of 5 stars 4.6 (5 ratings)

On September 25, 1925, the S-51 tragically sank to the ocean floor, and Edward Ellsberg was the man whose courage and determination brought it back

The sinking of the submarine S-51 was one of the greatest tragedies in American naval history. Due to a miscommunication and subsequent collision between the sub and a passing steamship on a September night, the S-51, including 33 of its crew of 36, sank to the ocean depths. The tragedy of the S-51 captivated the nation, and was a fixture in the pages of American newspapers. The story took on a whole new dimension when the navy decided to take over the salvage of the 1,000-ton behemoth from a civilian company.

Heading the crew tasked with this impossible feat was Edward Ellsberg, at the time a lieutenant commander. On the Bottom is Ellsberg's account of the successes and failures he and his men experienced as they attempted an astonishing feat of engineering and bravery: the first salvage of a submarine from the open ocean.

I have had the hard back copy of this book in my collection for over 20 years only 10 years less than I have been diving and it's probably the best hard hat salvage story I have ever read and loses nothing as an audio book , true story real heroes with real skill and courage .

I've always been fascinated by submarines and so when I came upon this title I immediately downloaded it. I had looked around for years to find a book detailing the salvage of a submarine that had been lost in tragic circumstances and was delighted to see Audible had this book in its catalogue.

In short, this is the incredible story of the trials and tribulations of the long months of dangerous work it took to eventually raise the S-51 and the bodies contained within from the depths. What is more incredible is the courage and daring seen when the divers with their trailing life lines and air hoses actually ventured inside the pitch black interior of the flooded submarine. Perhaps it's just me but this story occurred some 90 years ago now between the first and second world wars and at a time when it appeared that people were made of sterner stuff than the overly risk averse society we live in now. Men were doing things that no one would dare attempt today and doing it with without fuss.

The key thing I drew from this account was how despite the failure after failure, more than their fare share of set backs and bad luck that they just kept going and would not give up as I'm sure would be done today if the circumstances were the same. Just when you believed that things were going the salvage teams way yet another blight would occur to throw a spanner in the works. Time and time again the dive team would do incredible things to battle the sea and their dogged persistence paid off.

The main difficulty I have with this book is that unless you are familiar with all the terms used covering all the kinds and purposes of the equipment used for the salvage then that along with the complex descriptions of how certain things were to be done often left me mentally unable to picture the scene being described. This did detract from the account because one could not visualize what was going on much of the time although the general notion of what was trying to be done was understood.

The narrator chosen for this book had a perfect voice for this story as he sounded like a man plucked from the time the salvage was taking place. He was competent, clear and easy to understand but during exciting passages his cadence and pitch changed to an odd see-saw up and down which sounded a bit strange but perhaps fit the time and style of the story as told back then.

On the Bottom is more a fairly dry account rather than dramatic prose but is written well and gives the reader the flavour of the events that took place. If you have an interest in naval matters or complex salvage efforts then this is a book that is for you. Just be warned that there is a lot of nautical terminology relating to equipment mainly that can make it hard for land lovers like me to understand and this is where the book could have made use of a glossary of terms to aid the reader.

Doesn't Get Much Better

Adventure, true heroism, lots of stuff about undersea work - what more could you want?

An brilliantly written and narrated tale of men improvising and overcoming seemingly impossible conditions and odds.

an on the edge of your seat struggle at sea

I really enjoyed this story, being ex Navy and an ex Diver, I found the story riveting and exciting. A very tense story about a sub that is accidentally sunk and the men of iron will that struggled against all odds to raise her. I wish Audible had a greater selection of nautical stories like this.