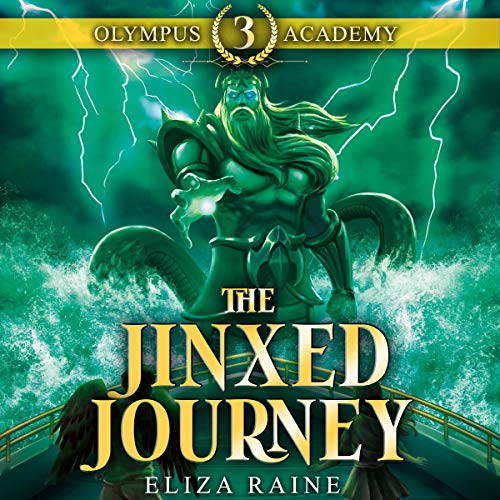 By: Eliza Raine
Narrated by: Kathleen Li
Try for £0.00

It's starting to look like Olympus is a lot more dangerous than I thought it was.

After dredging up a flying pirate ship belonging to the long lost Oceanus, I'm leaving the academy on a quest. And it's not just me going. My friends, Icarus, Zali, and Thom are coming too, but in a strange turn of events, two of the people who hate me most in the academy are also tagging along for the ride.

And what a ride it's going to be. We have to follow a series of clues across some of the most dangerous parts of Olympus, to try and free a Titan trapped by the Lord of the Olympians himself. And even more confusing, my absent mom has finally decided to show up.

It's not going to be easy, but it's the only way we can save the souls that were stolen by the demon that I let loose.

My mistake cost innocent people their souls. And now I'm the only one who can fix it.

What listeners say about Olympus Academy: The Jinxed Journey

I loved the other two books in this series and I am glad to say that this one does not disappoint. If you like YA and mythology then this is for you.

Great end to a great series.

I was given this book free for an honest review.

After Pandora found the flying ship and was able to pilot it she goes off on a quest with Icarus , Zari and Thom along with the 2 Olympians she doesn’t really like. They go off on a quest to find Oceanus and ask him to help save the souls of her fellow students who were stolen by the demon she let loose when she opened the box.
Things don’t go quite to plan and along the way her Mother arrives offering her help.
Really enjoyed listening to this book and following them all on the quest which puts them in danger but also helps them grow and respect each other .

Although I wished I listened to this series in it’s entirety from book one, this last book completed the series nicely. In PN I prefer a PNR but this is a very satisfying series geared toward a younger audience. Great storytelling and narration.

this was a great end to this journe and a nice into to the next. can't wait to read/listen to the next book!

Wraps it all up

I have ,over this series from the start. This was a great way to conclude this story and set us up for a new one! Great story great characters and great narration! Love it

OhMgee. I absolutely love love this series. I hope there is more. This was absolutely amazing from start to finish. It had me hooked till the end. I need a Icarus, please!!!

The only reason I completed the series, was to follow the progression to its conclusion.

The only one who showed any sense was icarus. I enjoyed listening to his character develop.

I won’t be advancing into any more that are read by this one.

It was an interesting story clean enough for kids to read. Fun use of Greek mythology.

The storyline was good but do not get this book if you don't like cliffhangers because you will always be wondering what happened and will never know.