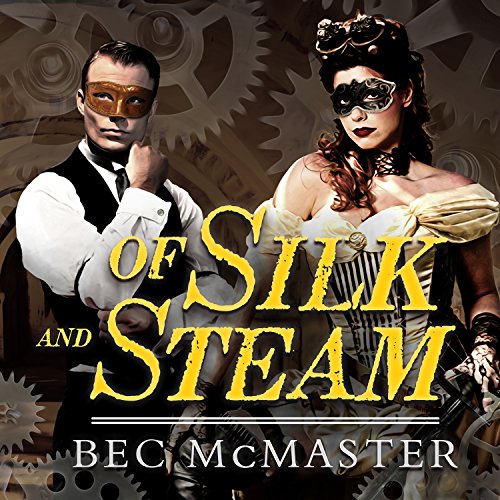 Of Silk and Steam

By: Bec McMaster
Narrated by: Alison Larkin
Try for £0.00

When her beloved father was assassinated, Lady Aramina swore revenge. The man responsible is well beyond her grasp, but his dangerously seductive heir, Leo Barrons, is fair game. When Mina obtains evidence proving that Leo is illegitimate, she has the means to destroy both the killer and his son, a man who troubles her heart and tempts her body.

A woman of mystery, Mina has long driven Leo crazy with glimpses of a fiery passion that lurks beneath her icy veneer. He knows that she's hiding something, and he's determined to unravel her layer by silken layer. He just doesn't expect the beautiful liar to be the key to overthrowing the corrupt prince consort or to saving his own carefully walled-off heart.

"The steampunk technology is fun and the characters nice and spicy...." ( Kirkus)

What listeners say about Of Silk and Steam

I loved this book and how it brought the current arc to an end. It was emotional with a few sad scenes and also a few that made me smile. It was interesting to learn the truth about Mina, she wasn't what she appeared to be and I loved her in this book. She and Leo were a great match with strong chemistry and more in common then they ever realised prior to this book!

I can't wait for the next story arc to continue the series and I hope Charlie and Lark get a book as Charlie has finally grown up due to events in this book that have changed him. I hope we continue to see our favourite characters in the new story arc and I can't wait to see where the next book takes us in the series!

This is my second favorite book in this series!

The story is fun and I love the weaving of the characters from previous books in the series into this one. The narration is great!

I hate to series end! I hope there will be another

All the major loose ends were tied up nicely, but I would love to see another book set in this version of late 19th century London with all the characters I've grown so fond of. I heard that there is a spin off series and I look forward to checking it out. This book can be read/listened to as a stand a lone but you will enjoy it more if you start from beginning with Kiss of Steel. Love the steam punk, love the paranormal, but best of all are the characters. 2 thumbs way up!

Another good audio book. I've both read and listened to this whole series and enjoyed it immensely. This book was heart wrenching and exciting. A good ending to the series. There were a few parts where the plot dragged a little and a few too many Sex scenes for me. Of course if you enjoy them you'll probably love this book. The narration was excellent and brought the book to life in a whole new way.

I am usually not a fan of Victorian-Steampunk novels, but this one held my interest pretty well. The narrator did a pretty good job of using different voices for the different characters, though there are a few lines I think were for a different character that she read for another. This isn't your typical romance, as the romance itself runs alongside another plot line (very nicely intertwined, by the way). This is my preference, as I have a hard time stomaching romance being the only plot line. The love scenes were a bit weird, but when you think of them in terms of vampires, it makes a bit more sense. The main characters are strong and compliment each other. I am particularly fond of the strong female lead character, especially her physical prowess that is believable. She isn't superhero strong/able, but she has practical, believable skills. The author also plays a good balance of male protectiveness and allowing the female space for the male protagonist. Overall, I would recommend this book, especially if this is your first foray into the steampunk universe. Note, though, that this is an alternate universe. Though "set" in Victorian England, it is not historical Victorian England.

I really enjoyed the struggle of each character and how they have all evolved. A wonderful turning point that has rocked their worlds.

Possibly my favorite couple of a series that has something for everyone. Suspense, intrigue, steamy romance! Great narration.

I enjoyed this series very much. It had lots of action, romance, and a great steampunk world. This seemed like this was final book in this series. The final battle for the crown is set into motion and the true conspirator behind the humanist is revealed. We also get to have the newest member of Blade and Honoria's horde arrive, although not without some problems. My Lady Quicksilver was my favorite in this series but all the books are really good. I hope audible gets the other book that Bec McMaster has written, because I would definitely buy them. Maybe she will come up with a spin off involving all the werewolves from Russia. I recommending reading Meljean Brooks Iron Seas series if you like steampunk they are my favorite. Narrator was pretty good.