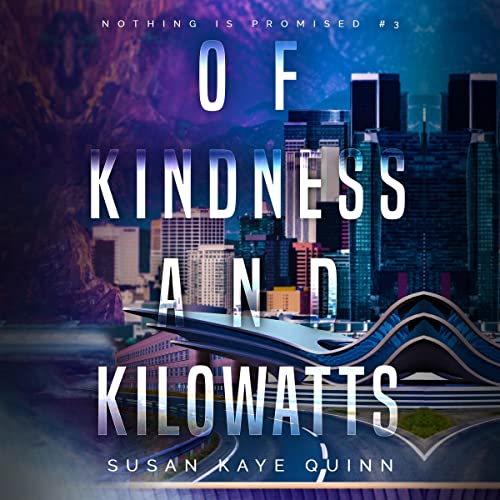 Of Kindness and Kilowatts

By: Susan Kaye Quinn
Narrated by: Paul Hikari
Try for £0.00

Humanity is trapped in a loop. As the world heats, it takes more energy to keep humanity from dying—a feedback loop that makes net-zero carbon increasingly impossible to reach.

Akemi’s job on the Public Utilities Commission has its own daily disasters—making sure the infrastructure of civilization keeps running is the most thankless job on the planet. When a double event hits—heatwave plus viral breakout—keeping the power on is an all-out battle. It doesn’t help that he’s distracted by his elderly father, who was struck down and neuro-compromised by the same virus that killed his mother the year before. Now his father is living in Akemi’s attic. They’d never had a relationship before, and that was a fair description of the state of things now.

Then an old friend’s daughter shows up with a mystery of physics… and a tale of stolen kilowatts and deadly intrigue. He would dismiss it outright, except she’s also the Regional Director of the power grid. Something isn’t right, and the Governor won’t accept excuses when the power goes out.

Sometimes, you’re the right person in the right place, whether you want to be or not.

Of Kindness and Kilowatts is the third of four tightly connected novels in a new hopepunk series. It’s about our future, how the world is always more complicated than it seems, and how just when it seems like things couldn’t possibly get worse, they invariably do… and that’s when we discover kindness and quantum entanglement are what hold everything together.

What listeners say about Of Kindness and Kilowatts