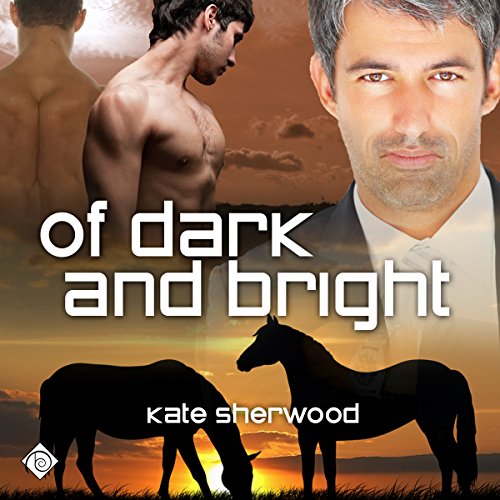 Of Dark and Bright

By: Kate Sherwood
Narrated by: Peter B. Brooke
Try for £0.00

This is a sequel to Out of the Darkness.

Jeff, Evan, and Dan have been living happily together for the past two years. They still have problems, especially between Evan and Dan, but they're mostly able to convert the interpersonal disagreements to sexual tension - and then resolve it - so nobody's complaining. Then Dan's long-lost sister shows up seven months pregnant and on the run from the law, and the situation goes from complicated to overwhelming. Jeff and Evan want to help, but with Evan fearful for his own sister's safety and Jeff struggling to keep his health issues under wraps, they're a little distracted. As Dan's sister struggles with her past, Evan's seems intent on gambling with her future.

What listeners say about Of Dark and Bright

What made the experience of listening to Of Dark and Bright the most enjoyable?

This is less than half the length on audio than the previous book but still just as good.

This chapter in the boys lives is a lot more melancholy than the first two books. I don’t think anyone that reads this series can fail to fall in love with Jeff. As I have said before he is the glue that holds the three together and an integral part of the relationship. At the start of this book he is questioning whether he is of any use to Dan and Evan and whether they would be better off without him. His self doubt is a little bit heart breaking. When he also decides to keep his health worries to himself he is not in a very good place.

Dan and Evan are just the same. One minute everything is fine and the next they are behaving like petulant 5 year olds and waiting for Jeff to sort them out. When Dans sister turns up after an absence of 15 years, 7 months pregnant, the sparks really fly. Evan is never slow to use his money to get what he wants and this situation proves no different. I have loved Evan throughout the three books but his behaviour in the barn when arguing with Dan left me wanting to smack him round the head, he was cruel and you begin to wonder whether the cracks are going to be too deep to fix this time.

I cannot recommend this series enough. It is the very real life struggle of three men and a slightly unconventional relationship. It is not all sunshine and roses but when they get it to work it is fantastic. I felt the first time I read it that it would have been great to see another book, I felt it was left a little open ended, just my personal opinion. I became invested in Dan, Evan and Jeff and would love to see how life worked out for them.

Narration
Peter B Brooke did another excellent job. His strong point is still not the female voices but he can be forgiven that I think as he does the three main characters so perfectly.

Book 3 of the Series

Would you listen to Of Dark and Bright again? Why?

I want MORE, what happen next ? What about Chris ? How is life now with a baby in their lives ?

What does Peter B. Brooke bring to the story that you wouldn’t experience if you just read the book?

He give the people in the story life

How Jeff illness affected ever one.

When can I get more ?

So this is an interesting situation. Normally, to review this – the end of a series, we would have previously been reviewing the earlier books. We didn’t here, but of course I read them. So in a nutshell here is what has happened:
In book one we mostly meet each of the MCs. It is a long, long, long book. Heart wrenching. Like 16 hours of audio, 384 pages. If I hadn’t been intending to review this – the last book in the series, I would have stopped at that first book. It is Kate’s first book and there are absolutely times that it shows. First, it is in the 3rd person omniscient voice. This can be a very bulky and awkward style to read. Definitely not my favorite.
Second, OMG all the back-story. We heard all about the ex (Justin), the horses, the secondary boyfriend (Ryan), the best friend (Chris), the sister (Tatiana), the mother (Anna)…. You get the idea. It was a long book full of angst and whining and really, I never got why any of them wanted to even ATTEMPT a Triad relationship, they were all so messed up.
Then there are several free books that go EVEN deeper into the back story and those I honestly only skimmed. They didn’t add to my enjoyment or appreciation of the story, so I go the idea and moved on.
Book 2 got a lot better. Now the three are together and are starting to work through some of their crap. There is a little more chemistry – not necessary to make a good book, but certainly something we expect in a Triad book, and it was conspicuously scant in book 1. The relationship is deepening and we see a little bit more as to why they should actually try to make things work. Though, if I’m being honest, I still wasn’t all that sold by the end of this book. Dan just drives me crazy. He’s so whiny and full of doubts and insecurities that I would have kicked him to the curb early on without regret. I don’t know why Evan felt he added so much to the relationship and I never quite understood what was missing between Evan and Jeff that they needed a third… it kind of felt like having a baby to save a bad marriage. Which brings me to Book 3.
By Book 3 the writing has improved. The characters are more believable. The relationship is more understandable and I actually found myself rooting for them a little bit. Then we get some drama in the form of Dan’s fugitive sister coming in and causing a boat-load of trouble and leaving the boys with a baby in the end.
There are a lot, lot, lot of holes in this story and I suppose some people would call that realism, but I’m not so sure. After spending so much time setting up the hurdles to their happiness, the end got a little to pat for me. Even Chris ends up with a boyfriend between books 2 and 3… I didn’t even know he was gay/bi!
I liked the depth the story went into on some levels, but mostly, I think it was a story in need of more editing.
If you love horses, difficult, angsty men, and long, involved stories – this is the series for you. Lots to read, lots of angst. If you are more – direct – this series will annoy the crap out of you. I guess I fall in the middle, I was glad to have read it, but it took work.
I give the story 3.5 of 5 stars
As for the audio version:
Peter Brooke did a great job differentiating the different men for me. By the time he got to this book he’d been doing it for hours and hours and it was a tight performance. His female voices were a little screechy and hard to listen to, but I guess what can you do with a deep voice like that?
He seemed to really understand the characters and I have to believe that some of my enjoyment of this third book was the listening rather than just the reading. I didn’t listen to the first two, if I had, maybe I’d have enjoyed it more. Hard to say.

I'm in love with all the books in the Dark Horse series- even the short ones, which should also be in audio. This book is one of my top go to when I need something to ease the day, I've listened to ODAB so many times, I've lost count:) enjoy

I'm not sure if this is the end of the series, I think so. If so, it ended wonderfully. This is my favorite of the three Dark Horse books. Evan, Jeff and Dan continue to work on their relationship, but the unexpected arrival of Dan's criminal sister brings danger to their family. In addition Jeff's health issue brings the three together and they realize how much they mean to each other. The narrator continues to do a great job.

This series has one ring I've had a huge problem with Dan .I know he's been thru a lot of. Problems but It makes me crazy I just don't like him no matter how much I try it's my least favorite of all Kate Sherwood books this guy is to much for a book this long I want to kill him my self she made him too much he's what every gay man doesn't want in their lives no matter how great looking or great sex just too icky I hated home after the first set of the series

I just finished listening to book 3 and it was truly wonderful! I am sad there is not a book 4 follow up so I can know what the next chapters in their lives bring. I HIGHLY recommend, it was a terrific, captivating story. A great writer.

Another excellent installment of dark horse

Simply put, I haven't found a series that is this well written and narrated yet on audible. Love the premise of the story.