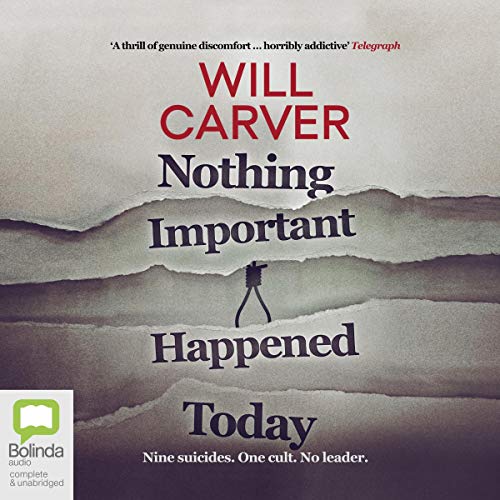 By: Will Carver
Narrated by: Ciaran Saward

When strangers take part in a series of group suicides, everything suggests that a cult is to blame. But how do you stop a cult when no one knows they are members?

Nine people arrive one night on Chelsea Bridge. They’ve never met. But at the same time, they run and leap to their deaths. Each of them received a letter in the post that morning, a pre-written suicide note, and a page containing only four words: Nothing important happened today.

That is how they knew they had been chosen to become a part of the People of Choice: a mysterious suicide cult whose members have no knowledge of one another.

32 people on that train witness the event. Two of them will be next. By the morning, People of Choice are appearing around the globe: a decapitation in Germany, a public shooting at a university in Bordeaux; in Illinois, a sports team stands around the centre circle of the football pitch and pulls the trigger of the gun pressed to the temple of the person on their right. It becomes a movement.

A social media page that has lain dormant for four years suddenly has thousands of followers. The police are under pressure to find a link between the cult members, to locate a leader that does not seem to exist.

But how do you stop a cult when people do not know they are members?

One week after the two witnesses jump to their deaths, 20 letters are opened across London that all say the same thing. Later that day, the strangers all know to meet at Tower Bridge. The Teacher will jump first. The Detective will be last....

My first thought is what on earth goes on in Will Carver's head? Whatever it may be, I feel we should all be thanking whatever higher power we subscribe to from the bottom of our collective hearts that he writes about it rather than acting upon it. This is a dark, dark commentary on the kind of society we have become versus the kind of society we should be. Boy oh boy, has Mr Carver got the measure of us, and therein lies the genius of the book. The whole cult, suicide, dispossessed, disenfranchised, depressed notion is completely and entirely credible. How it hasn't happened already is a rather bleak thought that struck me in the last moments of listening. Then, to put a beautiful bow on top of this glorious gift of a book, Mr Carver gives us an ending, which leaves the listener questioning if good ultimately wins out against evil? Can good men commit acts of evil and remain good? So many moral conundrums within that I will be pondering Nothing Important Happened Today for many, many days yet to come. Outstanding narration from Ciaran Saward adds to a book that is already overflowing with greatness. Upon finishing I immediately purchased every other book by Will Carver available on Audible. I hope the books that don't yet have an audio version are soon transformed. Got to be in by top 3 of the year for a book that really makes you think. 5 stars and a standing ovation from me. Truly remarkable writing matches a unique and original concept. Get this book today; you can always thank me later!

At last a great book from Audible.. Fantastic, captivating story which is told by a fantastic narrator. I didn't want it to end

The world is a shady place & Will Carver has found a very clever & hard-hitting way to give us a really challenging novel.
Yes it made me squirm at times, however, the short-sharp narrative kept me hooked to the end.
Try it, stick with it and you’ll certainly remember the experience.

I very rarely write reviews but this was so horrible I had to. The only thing this book would be good for is as an insomnia treatment. I only listened to about 1/4 of the book and have no desire to even go and read the end to see what happens, which I sometimes do with a bad book. I just could care less that's how bad this book is. If I could give if zero Stars I would.