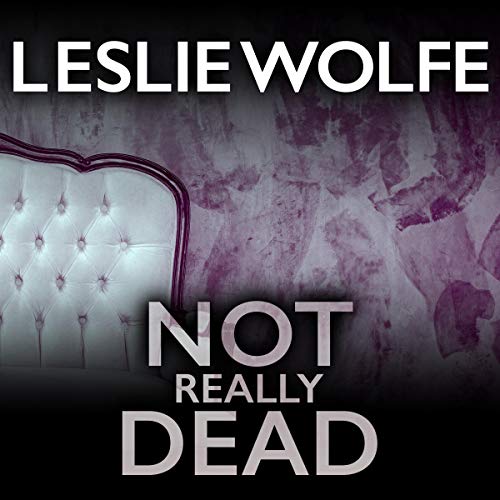 By: Leslie Wolfe
Narrated by: Gwendolyn Druyor
Try for £0.00

One number, one letter: 3D. Two characters, nine cuts, their edges always crossing, carved sharply into Danielle’s bleeding flesh. She’d seen it before. On his other victims’ bodies.

After a high-profile victim survives a brutal attack in her own home, FBI special agent Tess Winnett accepts to handle the investigation off-book. With every question she asks, the truth unveiled poses more questions, but leads to only one possible conclusion: The Word Killer is back.

The Word Killer has emerged after years of absence, more blood-thirsty and vicious than ever. Yet, his identity remains hidden, a mystery figure among the city’s millions, despite DNA evidence left at each crime scene. An impulsive murderer, disorganized and lightning-fast, fueled by an all-consuming rage that cannot be quenched. The worst kind of killer there is.

Then, why did his latest victim survive? Why was Danielle still alive?

A strong sense of deja-vu brings unwanted memories from a buried past Tess never wanted to relive. But if she wants to save the lives at stake when the killer’s latest deadline expires, she has to embrace who she has once been: the victim, the survivor, the fighter.

The best-selling author of The Watson Girl is back with another suspenseful, gripping crime thriller. If you’re a fan of David Baldacci, Melinda Leigh, and James Patterson, you will enjoy Leslie Wolfe’s enthralling police procedural that will keep you listening until dawn.

What listeners say about Not Really Dead

This case hits closer to home

Tess is such a great character, and with each new story we get to know her better, she has a great no-nonsense attitude to her work and doesn't come across as vulnerable but this case hits closer to home and we have glimpses of that side of her.

Tess's boss assigns her to a financial fraud case, not what we're used to, but she can't give it her full attention when yet another serial killer is out there killing woman, carving letters and numbers into their backs and painting words on the walls in their blood.

But one victim isn't dead and pleads with Tess to keep her attack secret. She's not supposed to be on this killer's case but she can't leave it alone. Going out on a limb is par for the course for Tess, she does her best work alone but this case as previously mentions strikes a little too close to home.

The narration of this book by Gwendolyn is excellent, she's one of my favourite narrators and always gives every book her all, add that to the excellent writing of Leslie and you have an exciting, gripping experience.

I was given this book as a gift and am voluntarily writing my review.

Not really bad in fact it's great

I still loved it. I read the book when it first came out and hoped it would be released on audible but with it being a novella (a lot shorter than normal) I wasn't sure it would, I was pleasantly surprised to see it had and I just had to get it. Glad I did it was fun reading it but with Gwendolyn as the narrator the story just comes alive. I love Tess, with her take no nonsense attitude but In this book you see her a bit more vulnerable as the case hits a little close to home. I like the way she works out the clues left by the killer but I still wish it had been longer mainly because I didn't want the story to end so quickly. Can't wait for the next Tess book.
Tess is in trouble with her boss again, this time for shooting a suspect and he wants her to look into a financial fraud case but how can she do that when another serial killer is roaming the streets killing woman. The only clues he leaves behind are the letters and numbers carved into the victims backs and the words he paints on the walls in there blood. That is until now. One of the victims isn't dead and begs Tess for help to keep her attack secret. Can Tess work out the reason for the carvings and stop a killer before he strikes again? A killer that she shouldn't be investigating. Going it alone is normal for Tess as she works best on her own but can she do it on a case that brings back so many memories of her own attack.
Gwendolyn is such a great narrator and one of my favourites, so combine a excellent narrator with a great book and you get a five star book, if only it was a longer story so the magic could last.
I was given this free review copy audiobook at my request and have voluntarily left this review.

Tess takes on a peronal case

Tess Winnett is back and just as badass as in all her previous stories. This episode has Tess embroiled in a case that has a direct connection to her own past experiences. This is a must read/listen for fans of Tess Winnett and Gwen Druyor!

What a ride, my heart would speed up, stutter and race off again. Intrigue, mystery, thriller. I enjoy the Tess Novels, watching her grow. I am as always trying to figure out the culprit and rarely do!

love the Tess Winnet serriesst did not enjoy the narrator. stared off really flat with no affect but did picked up some about midway through the book

Emotion of that all consuming love that they have for one another, he has to leave, duty to his father. The second is when she knows she is not alone, the fear, she tries to fight, and blacks out. Then we have Tess, she is an ace one profiler, wants to work alone, bends the rules, and is a frustration to her boss. Paper work for the last stunt she did, pulling her gun when there were crowds around. Then it comes out the word killer is back, and she wants on the case, they need her, if they want to catch him. Her books are captivating, with riveting plots, another winner by author to read,
Given audio which greatly added to the tension and plot, of this story. Enjoyed and does not disappoint .