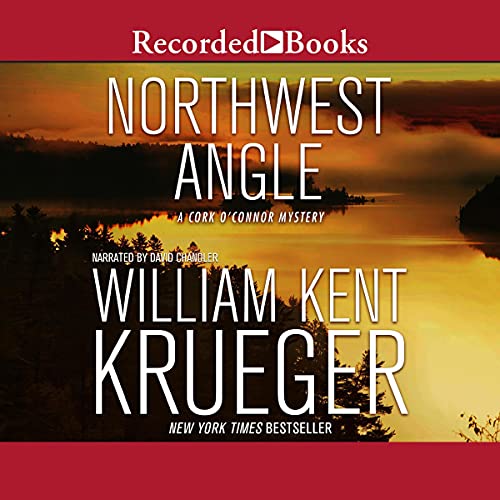 By: William Kent Krueger
Narrated by: David Chandler
Try for £0.00

With his family caught in the crosshairs of a group of brutal killers, Detective Cork O'Connor must solve the murder of a young girl in the latest installment of William Kent Krueger's unforgettable New York Times best-selling series.

During a houseboat vacation on the remote Lake of the Woods, a violent gale sweeps through unexpectedly, stranding Cork and his daughter, Jenny, on a devastated island where the wind has ushered in a force far darker and more deadly than any storm.

Amid the wreckage, Cork and Jenny discover the body of a teenage girl. She wasn't killed by the storm, however; she'd been bound and tortured before she died. Nearby, underneath a tangle of branches, they also find a baby boy, hungry and dehydrated, but still very much alive. Powerful forces intent on securing the child pursue them to the isolated Northwest Angle, where it's impossible to tell who among the residents is in league with the devil, but Cork understands that to save his family he must solve the puzzle of this mysterious child whom death follows like a shadow.

What listeners say about Northwest Angle

great storyline. interesting history lesson art beginning. I'm a Minnesotan and can't believe it's been that long ago. Never knew how the storm kept going and circled back to the lower states. interesting

the best one yet!

this was by far the best o'connor book yet. I couldnt put it down.

This was the best Cork O’Connor mystery yet. Mystery and action, of course. But even more, wisdom. May the peaceful wisdom of the Henry Melouxs of the world guide us all.

Krueger's descriptions of northern MN are compelling and add to the story, unlike in many novels, where the descriptions of physical surroundings seem gratuitous. Enjoyable characters. Good story

All of Krueger's books give such detailed vivid descriptions of the landscapes of his stories. Easy reads, nothing complicated.

Gets better with every book!

I like that the characters continue to fill out with each book. The series explores each one intimately and together as a family. If you love mysteries with depth Cork O’Connor books will fulfill that love. I can’t say I’d like them as much if they weren’t read by David Chandler.
Bottom line great series

Overall I thought the story line was pretty shallow. You could predict then ending less than half way thru the book.

Shallow, predictable and salacious towards the American Indians in my opinion. Used to like most of his work.

William Kent Krueger is a favorite of mine.

I really have enjoyed his Cork O'Connor series. I have a few more in this series to listen to, but I have enjoyed quite a few already. Love the nature aspect very much.

Wonderful book with lots of ups and downs.
Tears shed while wondering what was going to happen. Mystery all around, keeping you guessing.
Cork O’Conner and family in the mix of trouble once again will keep you turning the pages.

Too Much about Baby's and Breasts

Didn't get all the way through this, it was an interesting start but there was a lot of dialog about babies and breasts and the daughter of the main character. Overall disappointed, I normally love this series.