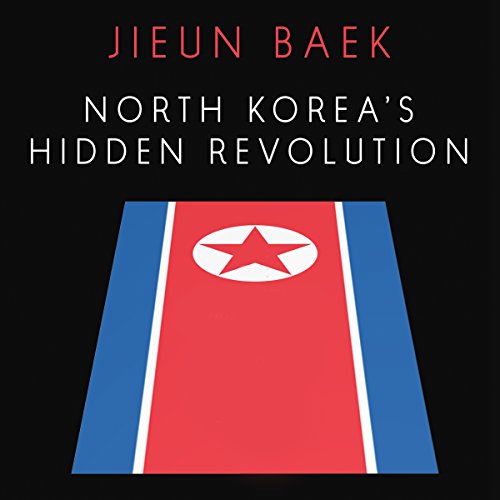 How the Information Underground Is Transforming a Closed Society
By: Jieun Baek
Narrated by: Caroline McLaughlin
Length: 7 hrs and 31 mins
Categories: Non-fiction, Politics
3.5 out of 5 stars 3.5 (10 ratings)

One of the least understood countries in the world, North Korea has long been known for its repressive regime. Yet it is far from being an impenetrable black box. Media flows covertly into the country, and fault lines are appearing in the government's sealed informational borders. Drawing on deeply personal interviews with North Korean defectors from all walks of life, ranging from propaganda artists to diplomats, Jieun Baek tells the story of North Korea's information underground - the network of citizens who take extraordinary risks by circulating illicit content such as foreign films, television shows, soap operas, books, and encyclopedias. By fostering an awareness of life outside North Korea and enhancing cultural knowledge, the materials these citizens disseminate are affecting the social and political consciousness of a people as well as their everyday lives.

"A truly interesting read for all people interested in North Korea." (Andrei Lankov, author of The Real North Korea)

They have managed to make a report on revolutions, smuggling, pint sized dictators and international esponage very dull. Thye have padded out the subject matter and this has made it even worse. This could of been a podcast with ease, maybe even too. But it is a very dull book. I would recommend not buying it and going elsewhere.

I follow North Korea fairly close...while about half the info was not new, half was. I knew info was getting into North Korea, but not how much and how it impacted. I felt like I listened to an abridged version... I would like to have heard more defectors experiences. The narration was just ok—voice was not annoying, but wooden and somewhat like a dry lecturer on an interesting topic—not enough to be offputting, but won’t excite either.

North Korea exists because it is a capitalist

...country ? yep, it certainly does. an illegal market economy that permits the country tosurvive

Out of all the Korean speaking Americans you could find a single one who could narrate? Caroline McLaughlin is mispronouncing the Korean words, especially the “dear leader”dictators name! OMG!!!! I’ll narrate for FREE and read/speak both languages fluently without an accent and guarantee I will say the Korean words correctly!!!! Just HORRIBLE!!! I tried to listen past it, but couldn’t. So disappointing! However, to end on a positive note the story is awesome!

Decent book not the best reading.

Pros
If you have never read N. Korea you will learn a lot from multiple first hand accounts

Cons
It’s written in a similar format as “Nothing to Envy” only not as much information and not nearly as good a read.

The reader sounds a little robotic. You can sometimes hear her shifting in her seat. It’s not an impossible listen though.

The narrator sounds robotic, monotonous and choppy. I'd rather listen to Siri. It's so bad that it ruined the content